While recent changes to Patent Trial and Appeal Board (PTAB) practices for America Invents Act (AIA) trials have garnered a significant amount of attention recently, the Board has also been making major strides in ex parte appeal pendency as well as improving accessibility to hearings in both types of matters.

The Board brought the ex parte appeal inventory down from a high of over 26,000 appeals in 2012 to less than 8,700 as of the end of the fiscal year. This is the lowest inventory in over a decade.

The Board’s significant reduction in ex parte appeal inventory means a corresponding significant reduction in ex parte appeal pendency. Judges obtain and decide cases faster, which translates to a shorter wait time for patent applicants to receive a decision regarding their patent applications. In fact, the average ex parte appeal pendency, which is measured from receipt at PTAB after completion of all appeal briefing through the mailing of a decision on appeal, has been cut by 50% from about 30 months in 2015 to about 15 months at the end of the fiscal year. And we are working to resolve pendency even more. 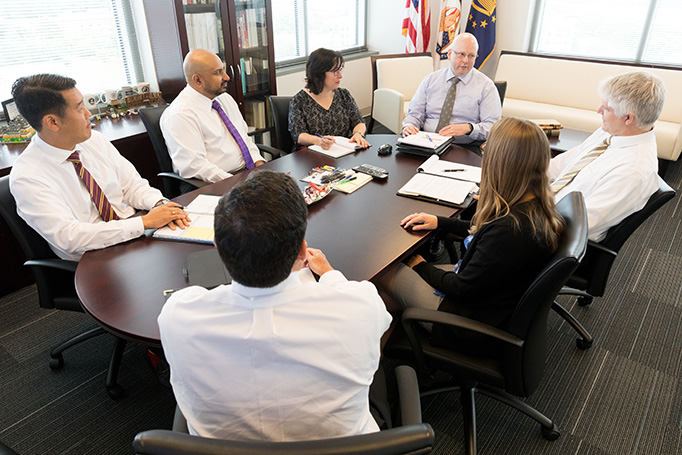 The Board has updated the notice of hearing in ex parte appeals. The updated notice allows the appellant to designate any regional office where they want to appear to argue their case. The updated notice also allows the appellant to request remote viewing of the hearing from any regional office. For example, an appellant may elect to appear for their hearing in Denver and request remote viewing for in-house counsel in San Jose.

Further, the Board has replaced its electronic docket management system for ex parte appeals to better assign, manage, and track cases and workloads. In December 2016, the USPTO deployed a new IT system called PTAB End-to-End (E2E) to receive and manage AIA trial filings.  In July 2018, the USPTO expanded the functionality of PTAB E2E to manage ex parte appeal filings. Through this expansion of E2E for ex parte appeals, the USPTO retired its legacy IT system previously used for appeal management. While the public will continue to file appeals through EFS-Web, judges will use PTAB E2E to process appeal decisions in more streamlined way, which means better customer service for applicants.

Separately, the Board has been making hearings more accessible and transparent. Among other improvements, the Board recently published a Hearings Guide to help parties prepare for a hearing. While this document did not create any new rules or procedures, it brought together separate descriptions of existing procedures so that parties have a single easy reference guide for any hearings-related questions. Additionally, the Board recently renovated the hearing room in its Rocky Mountain regional office to reconfigure the layout for better space utilization, and we are about to begin renovating and expanding one of the hearing rooms at our headquarters in Alexandria so that more members of the public can attend important hearings in person, such as our new precedential opinion panel hearings. We likewise are planning to update the audiovisual equipment in the other hearing rooms over the next 24 months.

We are proud of the strides that we have made to lower the inventory and pendency in ex parte appeals to better serve our stakeholders. And we hope these updates will give stakeholders more information and options to enhance their appeals practice. We will continue to make improvements and welcome your suggestions, which can be emailed to PTAB_Appeals_Suggestions@uspto.gov.