When visiting a USPTO location, personal and unauthorized removable media storage devices are prohibited from connecting with our IT equipment.

Learn more about the directors of our regional offices.

The United States Patent and Trademark Office (USPTO) operates a headquarters in Alexandria, Virginia, and four regional offices, which gives inventors, entrepreneurs, and small businesses the added benefit of a USPTO presence in every U.S. time zone. Staff in these offices work closely with intellectual property services, startups and job-growth accelerators in their regions. They collaborate with local science, technology, engineering and mathematics organizations.

The America Invents Act of 2011 granted the USPTO the ability to establish at least three regional offices. The first of the new offices, the Elijah J. McCoy office in Detroit, opened in 2012. Our Rocky Mountain Regional Office in Denver opened in 2014. Our Silicon Valley office opened in San Jose in October 2015, and serves the West Coast region. Our Texas Regional Office opened in Dallas in November 2015 and serves the region across the southern and southwestern U.S. 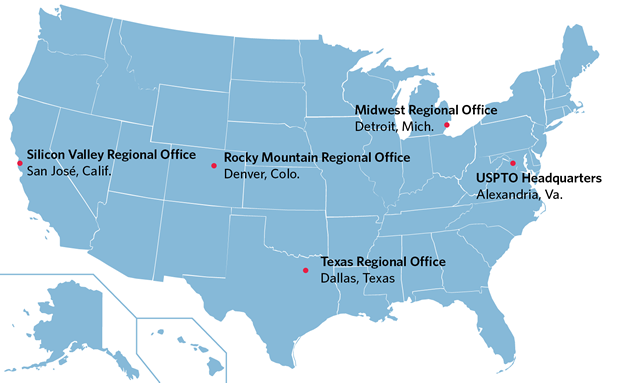