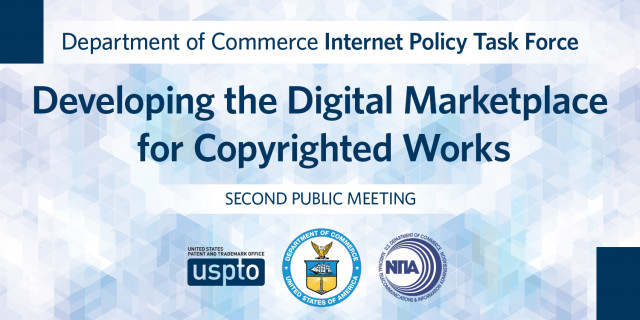 This meeting has been organized by the Department of Commerce’s Internet Policy Task Force. It follows up on earlier public meetings held by the Task Force in December 2013, April 2015, and December 2016.

Topics likely to be covered include: (1) initiatives to advance the digital content marketplace, with a focus on standards, interoperability, and digital registries and database initiatives to track ownership and usage rights and facilitate licensing; (2) innovative technologies (e.g. blockchain, artificial intelligence) designed to improve the ways consumers access and use photos, film, music, text, and other types of digital content; (3) international initiatives, including the role of government in facilitating such initiatives and technological development. Members of the public will have opportunities to participate at the meeting.

In the previous public meetings, the Task Force heard from stakeholders that the government can play a useful role by facilitating dialogues between and among industry sectors. Based on this feedback, the Task Force has organized this meeting to build on the work of the December 2016 meeting and facilitate constructive, cross-industry dialogue among stakeholders about ways to promote a more robust and collaborative online marketplace for copyrighted works.

Additional details about the meeting appear in the Federal Register notice, published December 22, 2017.

The meeting will also be webcast and made available for public viewing at the following USPTO Regional Offices:

The meeting will be physically accessible to people with disabilities. Individuals requiring accommodation — such as sign language interpretation, real-time captioning of the webcast, or other ancillary aids — should communicate their needs at least seven business days prior to the meeting to Hollis Robinson of the USPTO’s Office of Policy and International Affairs, telephone (571) 272-1500; email: hollis.robinson@uspto.gov.

The registration website  provides additional information about directions and accommodation.