The search for lost X-patents 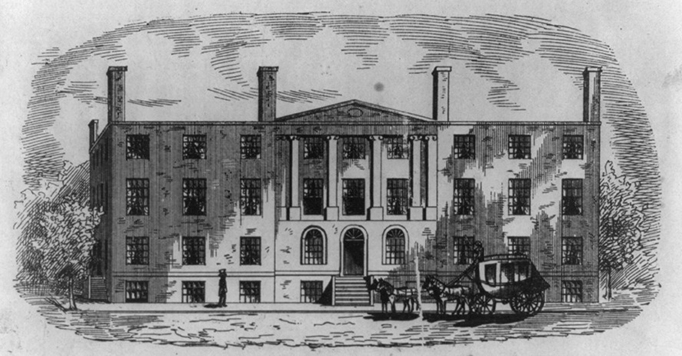 Blodgett’s Hotel, which never did function as a hotel, became the headquarters of the U.S. Patent Office and the General Post Office in 1810. (Image courtesy of the Library of Congress)

In December 1836, a catastrophic fire at the United States Patent Office destroyed records of American innovation kept since the earliest days of the Republic. We call patents from this era (1790-1836) “X-patents” not because they’re shrouded in mystery (although they are) but because they predate the numbering system now in use.

The so-called X-patents had been registered according to the name of the inventor and the date of issue. Only after the 1836 fire, as the Patent Office was reconstructing its collection, did examiners begin numbering the early grants retroactively. To distinguish them from contemporary patents, numbered from one (issued in July 1836) to 11 million (issued in May 2021) and counting, the letter X was affixed. Eli Whitney’s patent for the cotton gin, for example, issued in 1794, became 72X, as distinct from U.S. Patent No. 72, issued in October 1836 to Silas Lamson for an improvement in the construction of scythes. We now refer to all patents from before U.S. Patent No. 1 (issued July 13, 1836) as X-patents.

The fire of 1836 destroyed the specifications and scale models for nearly 10,000 X-patents. The only remaining records were kept by the inventors themselves, in the form of "letters patent,” handwritten precursors to today’s typed and digitized patent grants.

Standing amid the ashes, Commissioner of Patents Henry L. Ellsworth faced an impossible situation. With the transition to a rigorous examination system, enacted just five months prior to the fire, the Patent Office now relied on the records of past inventions to determine the patentability of future inventions. To keep functioning—to survive—the Patent Office needed those records, and fast.

The solution became the Patent Office’s first attempt at crowdsourcing its own history. Within a few months, Congress and Commissioner Ellsworth put out a call to patentees for information about their inventions, and based on the mailed-in responses, some 2,800 patents could be reconstructed. But the rest—more than 7,000—were never recovered.

Chronically overtasked, patent examiners of the later 19th century had little time to look for the Patent Office’s missing documents. In the 20th century, the devastating fire of 1836 and the lost records became a dim, distant memory to all but a few patent history enthusiasts. These volunteers—archivists, librarians, historians, patent examiners, and interested members of the public—have found hundreds of X-patents, and the USPTO has been adding the scans to its Patent Full-Text and Image Database (PatFT) for several years. The work continues to this day, with X-patents now available on the USPTO’s Patent Public Search site, too.

Surviving X-patents are scattered far and wide. Some are at grand repositories like the National Archives and the Smithsonian Institution. Others are at state and local archives, buried amid the papers of inventors, their businesses, or their families. Some X-patents have even turned up in people’s attics and at public auctions. If you happen upon one that isn’t already in the USPTO’s Patent Public Search, please notify the USPTO Historian (historian@uspto.gov), and we’ll add it to the database.

The more X-patents we have digitized, the less vulnerable our history will be to fires like the one in 1836. Equally important, of course, is the accessibility that our databases provide. With an ever-expanding collection of X-patents available online to all visitors to USPTO.gov, we’ll be giving researchers and history buffs all over the world first-hand accounts of what was state of the art in the earliest days of U.S. history and how early Americans first used patents as tools of intellectual property protection.


This is a fascinating history of the fire, the lost patents and ongoing recovery efforts!

I have an original patent signed by John Quincy Adams that may be one of the lost X-patents. Let me know if I can help the USPTO restore this at least one patent. The specification was given to my secretary to transcribe but may have been lost. The drawings and patent are framed. I will contact my former assistant to see if she still may have it. I recall the title as a copper-plated printing press with original drawings. I traded it for one signed by Andrew Jackson, who was a dealer in old documents. I do not know what happened to the Andrew Jackson patent or anything about its disclosure.

Thank you, Dr. Bisno, for expanding the search for the lost X-Patents via the USPTO's online platform, a vital connection for researchers around the world. There remains much to be learned about American innovators and their ideas, both as history and as inspiration and guidance for the future of IP.

Adam, thanks for writing about this. I found eight X patents on USPat that aren't in patft or ppubs! Now I know who to contact :-) On the same subject, look for commenter Barbara Hampton's article "Stalking the Wild X Patent".

Commending you for a well-written article. Your team is assembling the right details to build robust metadata. I’ve seen G—gle Patents reduce the list of a U.S. inventor’s registered patents shown online from over 60 to now 36 since 2003. I combed old patent registries and archives to find several missing patent numbers. I screen-saved Milon J. Trumble’s patents online since 2003. His breadth of registered patents publicly visible became diminished for hydrocarbons inventions. This reduction in publicly visible patents narrowed the broad scope of his early registered work. His patents covered asphalt manufacturing to solid fuel, and then into oil cracking for high octane aviation fuels. More robust USPTO metadata will reveal the strategic path taken by this inventor named MJ Trumble to become the first American to register his patents in every country of the world in 1916. www.envirotechnicalimaging.com