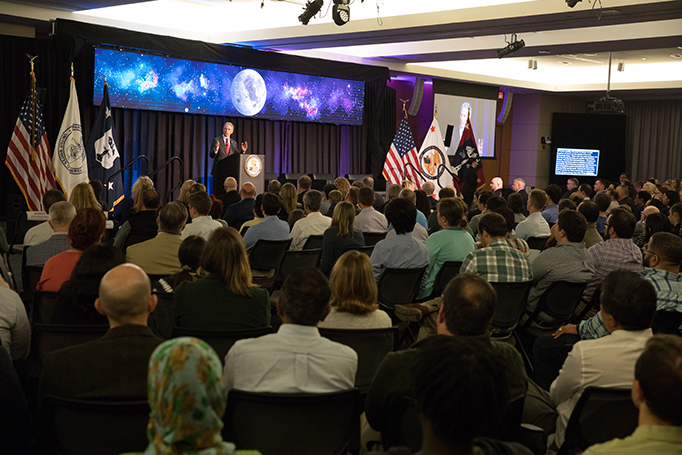 Director of the USPTO Andrei Iancu addresses the audience at the July 23, 2019 Apollo 50 event. (Photo by Jay Premack/USPTO)

On July 20, 1969, an estimated 530 million people watched from around the world as Apollo’s lunar module touched down in the Sea of Tranquility and Neil Armstrong became the first person to step onto the surface of the moon. It’s hard to believe that it took less than 65 years from the Wright brothers’ patent to the first step on the moon, and the fact is the pace of innovation just keeps accelerating. On July 23, the USPTO celebrated the 50th anniversary of the moon landing and its significance on invention, space commerce, and intellectual property (IP). The program’s two major themes quickly became evident: innovation and inspiration.

In an overflowing auditorium full of employees, students, and members of the public, we were honored to be joined by many special guests including: Secretary of Commerce Wilbur Ross; NASA Administrator Jim Bridenstine; astronauts Kathy Sullivan and Paul Richards; Director of the Office of Space Commerce Kevin O’Connell; NASA Associate Director, Satellite Servicing Capacities Office Frank Cepollina; and several CEOs of aerospace companies. If you missed it, watch the recording. 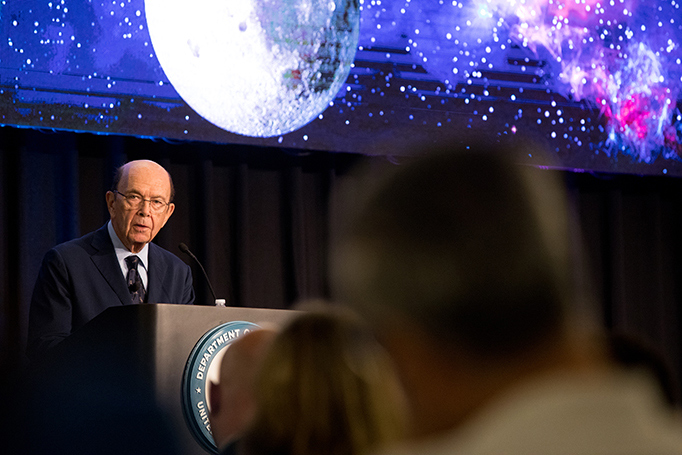 In his remarks, Secretary Ross spoke about the importance of space commerce, stating that “protecting the intellectual property of new space companies, entrepreneurs, inventors, and individuals is essential for U.S. success.” He also acknowledge the important role of USPTO examiners and employees who “provide inventors with the protections they need to commercialize their technologies, create companies, hire employees, and put people, satellites, manufacturing plants, and tourists into space.” 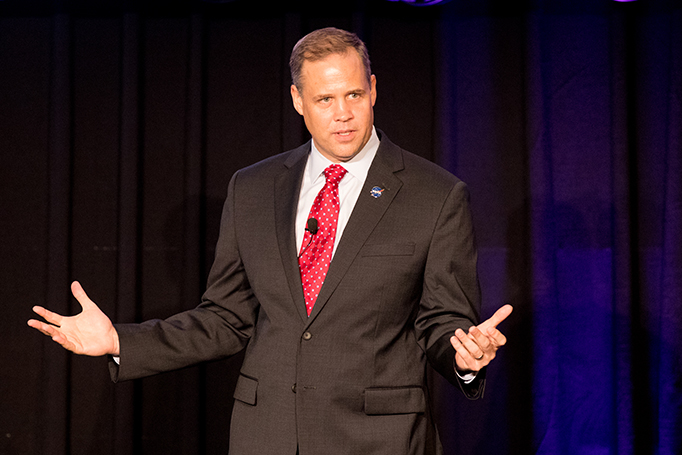 Administrator Bridenstine explained how NASA obtains patents for many reasons, including its continuing mission to elevate the human condition. Part of the reason that NASA has more than 1200 patents in its current portfolio is to drive down the costs of technology, allow it to scale faster, and minimize the risk. He described how a number of essential, pioneering NASA technologies directly impact life on earth, from our food production, water conversation, banking, and telecommunications systems. 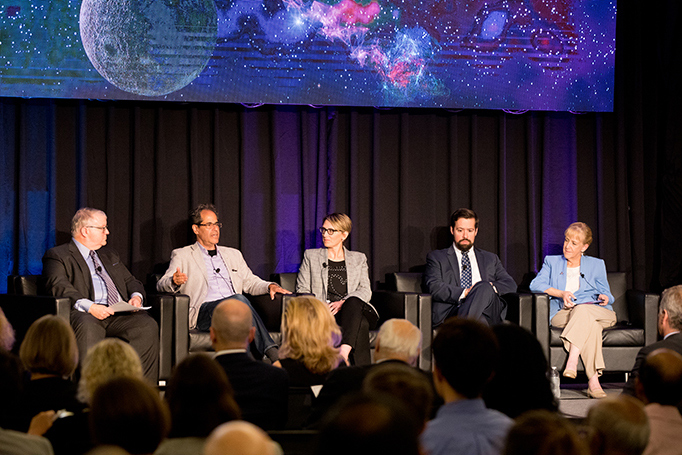 Kevin O’Connell, Director of the Office of Space Commerce at the Department of Commerce, led our panel discussing the rapid growth of the global space economy, and the role of the private sector plays in commercializing space. Panelists included Jeffrey Manber, CEO of NanoRacks; Melanie Stricklan, founder and chief strategy officer of Slingshot Aerospace; Christopher Ingraham, Manager of Stakeholder Communications at International Space Station U.S. National Laboratory; and Dr. Mary Lynne Ditmarr, President and CEO of Coalition for Deep Space Exploration and member of the U.S. Space Council. 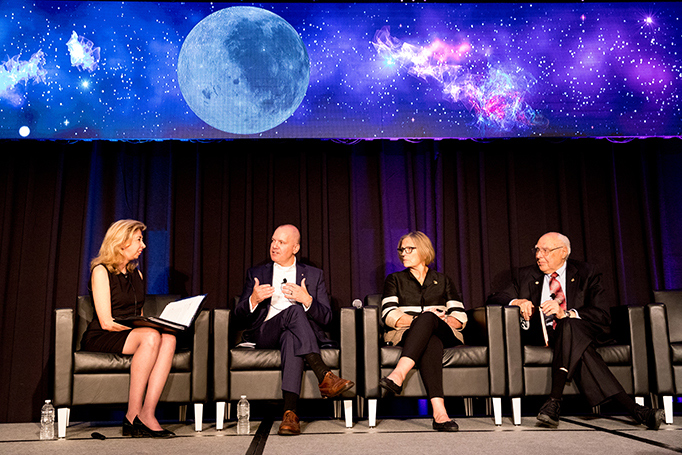 The highlight for many was hearing from the panel moderated by Deputy Under Secretary and Deputy Director of the USPTO Laura Peter on NASA’s innovation policies, featuring true rock stars of space: Doctor Kathryn Sullivan, astronaut on three space shuttle missions and the first American woman to walk in space (in 1984); Paul Richards, astronaut on the eighth shuttle mission to the international space station; and Frank Ceppolina, pioneering engineer on the Hubble space telescope and National Inventors Hall of Fame inductee and patented inventor. 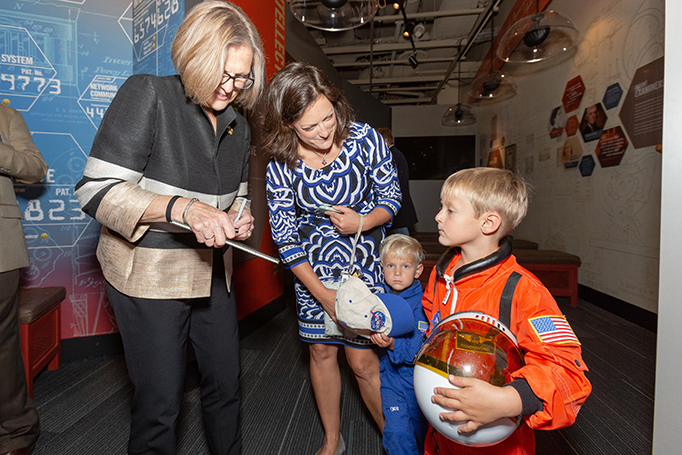 The discussion focused on the role of technology transfer policies and IP that have contributed to improving life for all of us here on earth. Deputy Peter walked through a number of NASA-related patents whose technologies have become everyday household items, including scratch proof lenses, Invisalign™ braces, video game systems, insulated rescue blankets, and more. Cepollina described how the repair mission work on the Hubble Space Telescope (HST) advanced fields like photo lithography, and noted that our current cell phones are 260,000 times more powerful than the Apollo guidance system controller. After the event, the astronauts signed autographs for children and other fans. 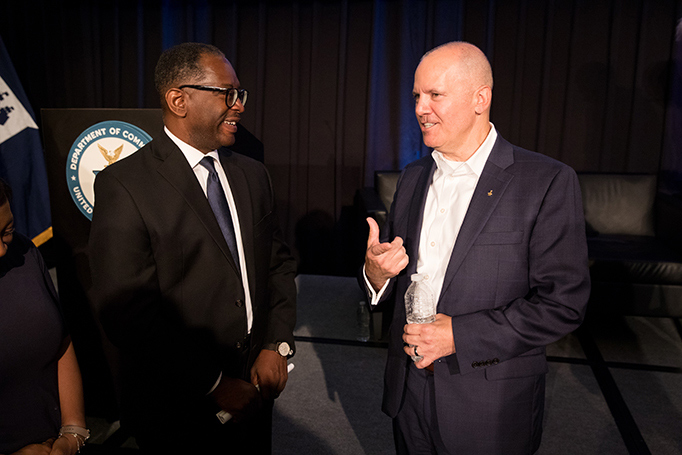 In addition to these space pioneers’ impressive contributions, Richards and Cepollina are also inventors and patent holders. Richards is the inventor of a pistol grip torque measuring power tool for which he received a patent in 1997. In fact, the NASA patent attorney who prosecuted that patent application, Keith Dixon, now works with at the USPTO. And Cepollina’s work at NASA and in patented technologies are not only important to space technology growth but have also been a springboard for developments in other industries including breast cancer detection and more powerful microchips for satellite optics. 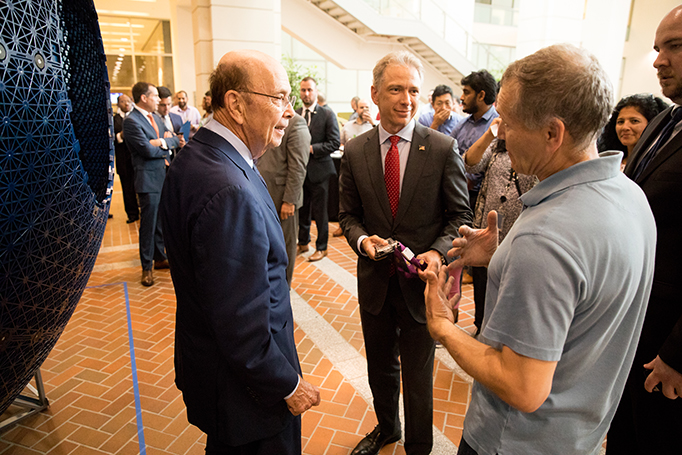 Secretary Ross and Director Iancu speak with the inventor of the Virtusphere, Ray Latypov. (Photo by Jay Premack/USPTO)

Finally, before and after the event, participants had the chance to view an Apollo era spacesuit loaned from the Smithsonian, experience a virtual moon walk provided by the Institute of Electrical and Electronics Engineers (IEEE), and visit the National Inventors Hall of Fame® Museum's Apollo 11 exhibit.

As I said at the event, landing on the moon was the ultimate triumph of human ingenuity. The benefits of space innovation are astounding. Our IP system not only helped make this possible, it continues to promote and protect stunning advances in every field of human endeavor.