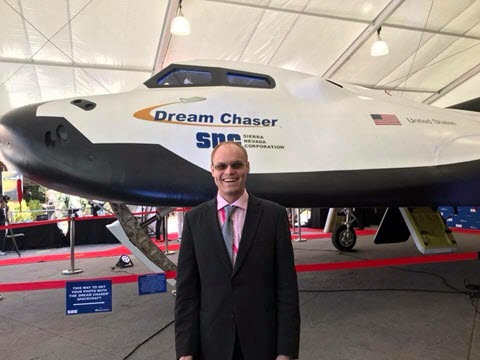 Space exploration has been, and continues to be, a source of amazement for many Americans. Kyle Snowberger is no exception. When he was young boy, NASA’s space program enchanted him like a fairytale, and he dreamed of being a part of it. As he grew older, he began checking all the right boxes to turn that dream into reality. He worked hard, studied hard, earned a degree in aerospace engineering, worked for a major Department of Defense (DoD) contractor, and continued to work hard. Yet, in spite of Snowberger’s efforts, he still found himself without the resources to pursue his dream.

The USPTO’s Patent Pro Bono Program, however, was able to provide him with the chance to realize the dream. In this interview, Snowberger gives us a glimpse of his journey.

What is the nature of your invention?

High Altitude Air Launch is an aerospace vehicle designed to deliver large satellites to Earth orbit. The invention claims a novel vehicle and method for spaceflight.

What was the inspiration for your invention? How did you come up with the idea?

The original inspiration for High Altitude Air Launch, besides my abiding passion for aviation, was a piece of balsa wood I own. Laser-etched into the balsa are airfoils for a scratch-built remote control aircraft that was never built. The elegant curves are rather artistic in nature, so I mounted it on the wall in my Derby, Kansas apartment. Mounted right next to my desk, it caught my eye in the winter of 2017, and I realized the cross section of a wing has a lot of potential for internal components. After I refined my idea in a computer-aided design (CAD) model, High Altitude Air Launch began taking shape. I am still in disbelief of my Cinderella story since then, with great thanks given to Philadelphia Volunteer Lawyers for the Arts (PVLA), PA Patent Pro Bono Program, and Ballard Spahr LLP.

What problems does your invention seek to solve or address?

The contemporary problem the invention seeks to solve is the affordable delivery of large payloads to orbit. Specifically, High Altitude Air Launch would belong to the Super Heavy Lift Launch Vehicle class, delivering in excess of 50,000 kg (110,000 lbs.) to orbit in one launch. The chief design requirement is a delivery price under $2,000 per kg, which is currently only achieved in industry by SpaceX’s Falcon Heavy, should it be in a reusable configuration.

The visionary problem High Altitude Air Launch seeks to solve is the feasible construction of large manned space stations. For generations, visionaries such as the late Dr. Stephen Hawking, Arthur C. Clarke, and Wernher von Braun advocated for continual space habitation. Artificial gravity stations are the solution to the single largest hurdle: microgravity. High Altitude Air Launch might provide a solution for the feasible construction of artificial gravity stations. This aim is the why of the entire endeavor.

What challenges did you have to overcome in designing your invention?

Oh my, well, I’ll try to provide a nearly comprehensive list. The first and largest hurdle I faced was my own doubt. As an unemployed 23 year old with an outlandish idea, I reasoned with myself that nothing similar had been developed, not because no one had ever thought of it, but because it was impossible or highly impractical. In all the decades of the military-industrial complex, I had thought an X plane or DARPA project would have investigated non-freestream facing missile launch (that is, launching a missile in a direction other than the direction an airplane is flying). The more research I did, the more perplexed I became. Looking through patents in my spare time (which I had a lot of), nothing struck me as anything close to my idea.

Still experiencing self-doubt, I imagined I was simply failing to do a proper patent search. I attended a patent and IP seminar open to the public at Wichita State University. At this seminar, I was introduced to the newly expanding pro-bono program. Librarians at WSU’s Patent and Trademark Resource Center helped me to refine my patent search.

Concurrent to these developments, I was running out of money, as well as job applications, in the one-time “Aviation Capital of the World”. All entrepreneurs have too little money at some point, so in that challenge I’m not alone. I decided to move back home to Pennsylvania.

How and when did you first hear about the PA Patent Pro Bono Program?

I first heard about the PA Patent Pro Bono Program during a patent seminar at Wichita State University. The speakers elaborated on the Patent Pro Bono program extensively and disclosed the eligibility requirements. Wichita Kansas’ pro bono office is Gateway Venture, located in St. Louis, hundreds of miles away. I mention this because I want to highlight just how privileged pro bono clients are on the east coast. Simple geographic proximity to patent attorneys is a benefit that cannot be overstated. It is my hope, as the USPTO expands the Patent Pro Bono Program, that more existing institutions in America’s heartland cities will offer volunteer patent and attorney-matching services.

How did your involvement in the PA Patent Pro Bono Program help you to accomplish your goals relating to your invention (e.g., patent prosecution, marketing, promotion, etc.)?

Without PVLA, and the unlikely chance of being matched with two experienced patent attorneys, my goals would not have been fulfilled; my invention would never have manifested, and I say that with conviction. Only through this IP protection have I felt secure in pursuing self-marketing opportunities. Penn State Mont Alto’s LION ™ Tank competition would not have seen me as a competitor without patent pending protection. Likewise, I would not have had the audacity to apply for NASA iTech and the National Institute of Aerospace’s Ignite the Night Shark Tank. And yet here I am, just a kid with a humble bachelor’s in aerospace engineering, preparing to pitch my invention to industry experts at the renowned Space Symposium. Without PVLA and Ballard Spahr LLP, none of this Cinderella story would have happened.

The important lesson here is not about some burgeoning success from a scrappy 20-something. The lesson is the profound change that can be made in the world through sponsorships, even as financial inequality increases in the world. Volunteer patent services make dreams come true. All it takes for an entrepreneur to succeed is just enough courage to submit an application for assistance. Once that is done, programs like the PA Patent Pro Bono Program can turn that small step into a giant leap.

What was your overall impression or take away from your involvement in the PA Patent Pro Bono Program?

I was impressed by the level of competency the patent practitioners exhibited. For the most part, we were able to convey ideas readily, using industry jargon such as “apogee-kick motor,” “hypergolic,” “high altitude long endurance airfoil,” etc. However, there were days throughout the process where I was discouraged and thought that this never would come together — the scope was too large, I had bitten off more than I could chew. But we swiftly got through it. After reading through my submitted patent application, my main takeaway is the need for comprehensive protection provided by precisely worded claims.

If not for your involvement with the PA Patent Pro Bono Program, what is the likelihood that you would have been able to realize and achieve your goals relating to your invention?

Null. Zilch. Nada. I would have likely never chosen to pay upwards of $30,000 to file a patent. Unlike a simple consumer product, High Altitude Air Launch is of a scope that provides no realistic ROI guarantee. It simply would not have been worth the risk.

Since you became involved with the PA Patent Pro Bono Program, what developments, if any, have you seen in relation to your invention (e.g., patent application filing, marketing, exposure, etc.)?

What are your future goals/plans for your invention (e.g., monetization, licensing, commercialization, use, etc.)?

At this time, I am willing to disclose what has already been published on my shark tank slide deck: A joint venture with Paul Allen’s Stratolaunch will be pursued. M&A opportunities, as well as other angel investors who express interest, will be given careful consideration.

NASA has off-boarded orbital operations to the commercial sector, reserving deep space missions as their primary focus. Provided this current paradigm holds for the next 10 years or so, there may be an opportunity for governmental grant funding. High Altitude Air Launch may be licensed to NASA or an international agency for the launch of deep spaceflight equipment.

What advice would you give to other inventors and individuals seeking to patent their ideas and inventions? 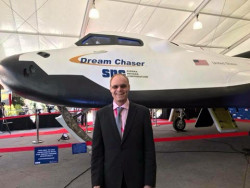 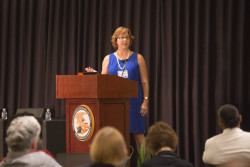