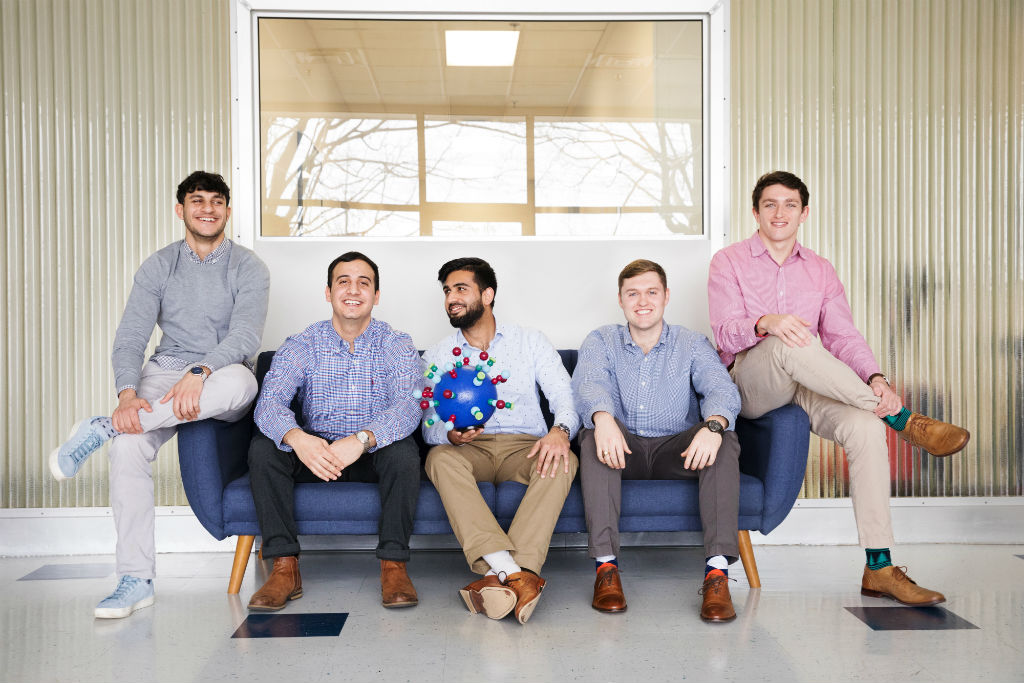 How do innovative companies start? What happens to disruptive ideas between the time they are born and when they are transformed into widespread commercialization?

In this story, we look at a startup in Charlottesville, Virginia, aiming to change modern agriculture with its paradigm-shifting technologies.

Each month, our Journeys of Innovation series tells the stories of inventors and entrepreneurs who accomplish great things. This month, we follow some who are just starting their journey.

In our Journeys of Innovation series, we have so far featured established innovators and entrepreneurs who have already made their impact on the world felt. Yet, sometimes the story isn’t about what that journey creates, but where it begins and how it develops in its earliest stages. In this story, we’re showcasing a team of innovators who are still at the beginning of their journey. Their story doesn’t yet have an ending, but it starts in a lab in Charlottesville, Virginia.

Payam Pourtaheri and Ameer Shakeel met in their final year as biomedical engineering students at the University of Virginia (UVA), looking for one last research project that could help propel them into medical school.

“I didn't know this guy—he didn't know me,” recalls Payam. “We got into a project together. We got lucky.”

For their project, they decided to focus on something they both found interesting but also outside their area of expertise: pesticides, or rather the dangers pesticides pose to farm laborers and the environment, particularly in countries with poor regulation or knowledge of their harmful health effects.

Payam and Ameer were already familiar with synthetic biology, an emerging field that combines multiple disciplines, including chemistry, molecular biology, genetics, and engineering to create and manipulate biological components and systems (see our Journeys of Innovation for Frances Arnold, Nobel laureate and synthetic biology pioneer). What if they could apply this revolutionary science to one of humanity’s oldest industries: agriculture? From their research emerged a novel strategy of using engineered biological particles to speed up the degradation of pesticides. They found that they could program these “bioparticles” with enzymes derived from microorganisms that targeted specific chemicals in pesticides. Field tests showed them to be extremely effective, completely neutralizing chemical compounds in a matter of hours versus natural degradation rates of days or weeks. They coined the term “AgroSpheres” for the bioparticles, and the name stuck. 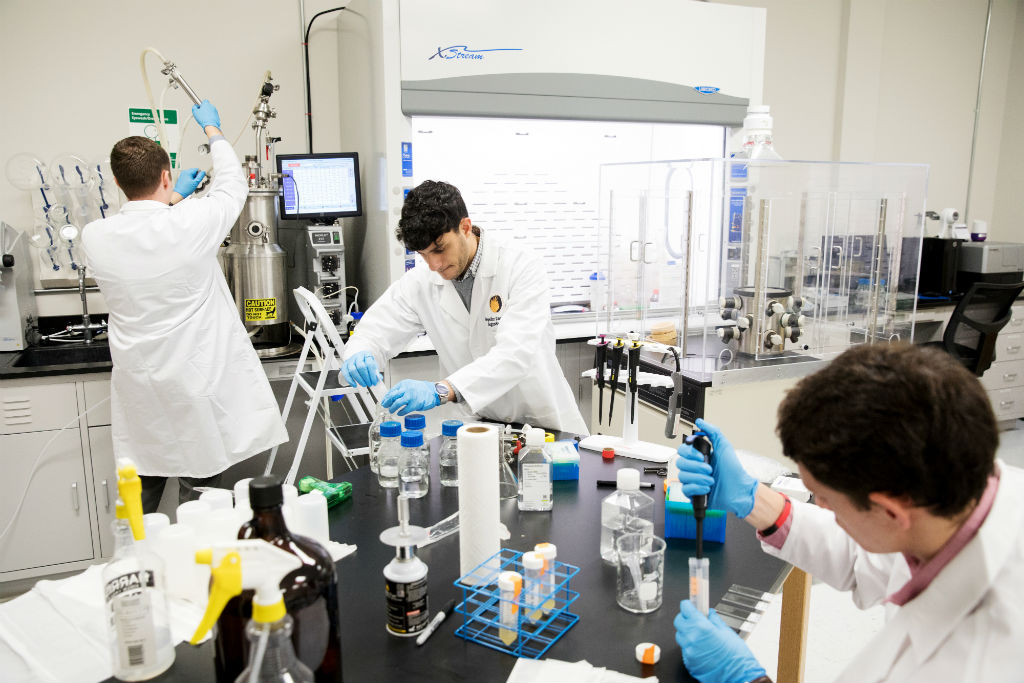 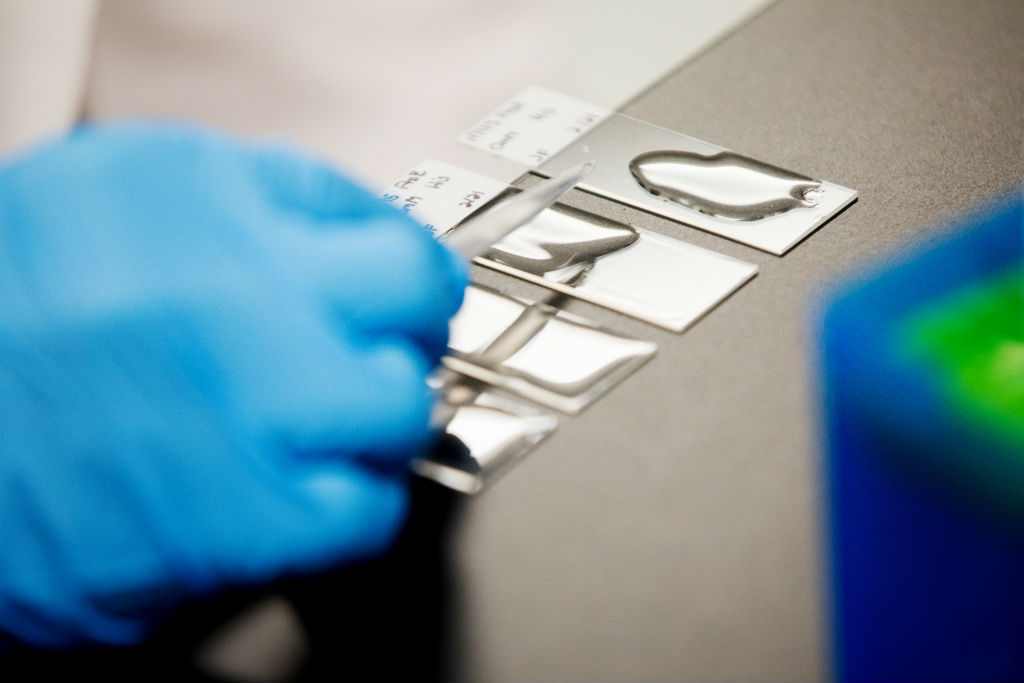 Top image: The AgroSpheres team, from left: Sepehr Zomorodi, Payam Pourtaheri, Ameer Shakeel, Zachery Davis, and Joseph T. Frank. Ameer holds a model of one of the bioparticles they have developed.
Left: From left: Zachery Davis, Sepehr Zomorodi, and Joseph T. Frank conduct research in their lab.
Right: Immunostaining is used to determine the success of protein production that enables AgroSpheres’s nanotechnology to safely target and bind to plants and insects.

For their groundbreaking work, Payam and Ameer won first place in the undergraduate category at the 2016 Collegiate Inventors Competition, sponsored by the National Inventors Hall of Fame and held each year at the USPTO’s headquarters. After taking home the gold medal and a $10,000 prize, the two realized they had more than an award-winning project on their hands. In fact, they felt it was big enough to put aside their plans to attend medical schools. It was time to take the next step.

“We were so ready to be a real company,” says Payam. “Obviously it was fun, but it was also: Are you guys real entrepreneurs or are you just winning competitions and doing this as a resume booster?”

As the pair crisscrossed the country garnering praise and awards, each received news that he had been accepted into medical school. Payam was even offered a full-ride scholarship to Penn State. Now came the difficult part: telling their families they weren’t going to accept.

“Initially there was resistance,” says Ameer. “But when they came to the Collegiate Inventors Competition at the USPTO and saw us win, they saw the potential of what this is. That competition was helpful on a personal level because it helped me gain support from my family for what I was doing.” 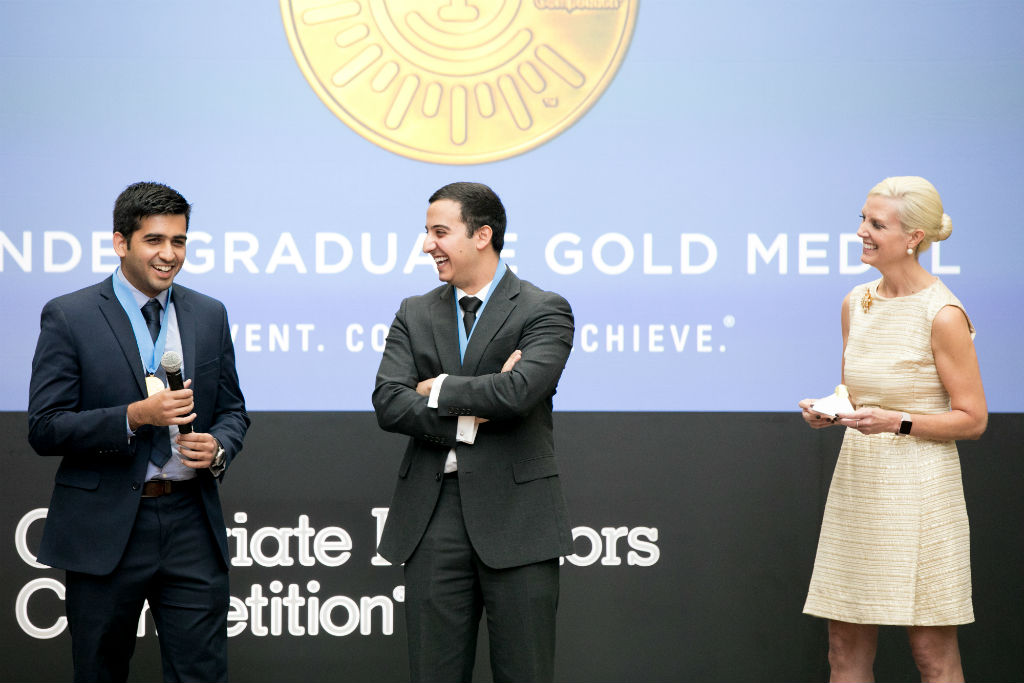 Rather than medical school, the two young men were going to focus on developing a future in which their bioparticles could be used in tandem with chemicals that, however potentially harmful, were instrumental in increasing food production and humanity’s ability to feed itself.

Perhaps Payam and Ameer’s desire to change course came as no surprise to their families. Both of their parents had first planted seeds of risk and reward long ago when they created new lives for their children in America. Payam’s parents emigrated from Iran and naturalized while he was still a child. Though Ameer did not emigrate from his native Pakistan until college (he became a naturalized U.S. citizen in November 2018), he had many family members already in the United States, and his parents brought him for frequent visits while he was growing up.

“They took a huge risk, so I wouldn't have to,” says Payam, “but I'm also a risk-taker. They were like, ‘Med school is always there. This is a once-in-a-lifetime opportunity. We are happy that you are happy with what you are doing’… That itself was such a huge confirmation for me, that now I could go into it with no regrets.”

With their family’s support fully behind them, the pair tackled the challenge of starting a company as the next stage in their journey. They recruited several of their UVA classmates to join: Zachery Davis, Sepehr Zomorodi, and Joseph T. Frank. All of them are under the age of 25. Their faculty advisor, Dr. Mark Kester, whom Payam and Ameer credit as a mentor and major influence on their project, also became a strategic adviser.

Following graduation, AgroSpheres moved into UVA’s i.Lab incubator for a one-year residency. Here, they sharpened their focus, gathered industry partners, set up an advisory board, and prepared for a move to their own facility. It was also during this time that the team faced fundamental choices about the direction of the company. 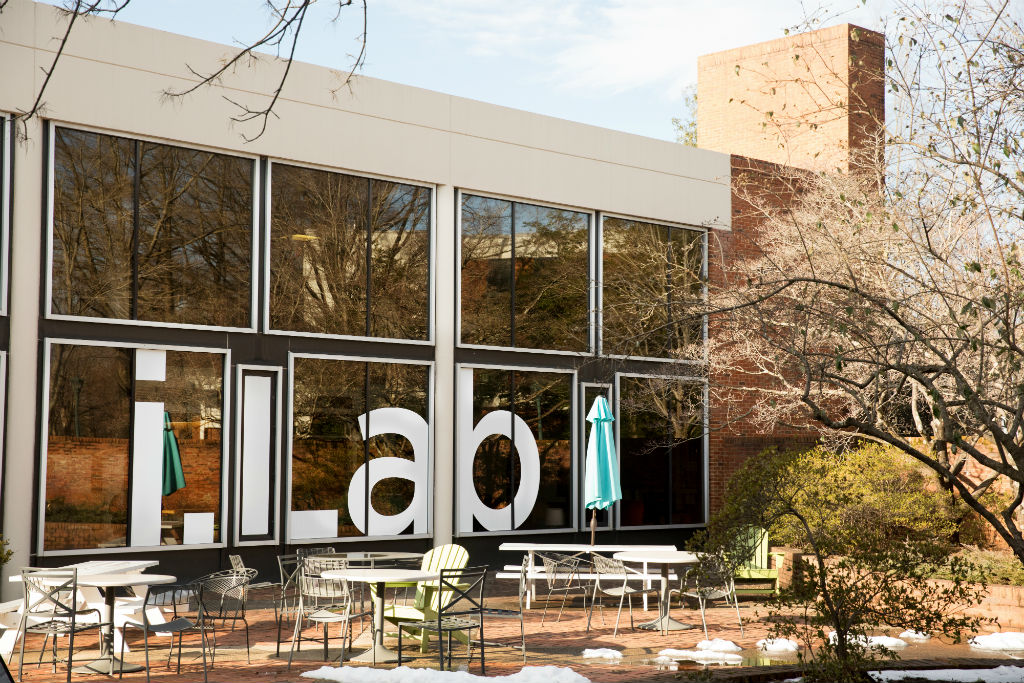 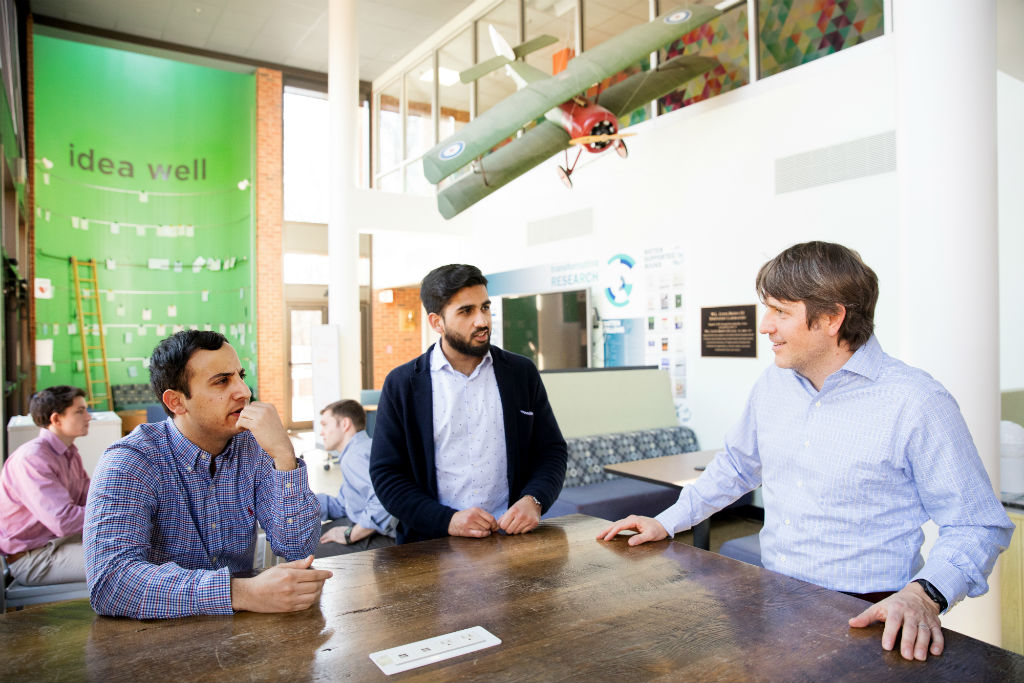 “Over 70% of sprayed pesticides don't reach their intended target, so they are washed away by the rain or they evaporate,” explains Payam. This lack of efficiency means more pesticides must be used, with potential consequences for the environment, farm workers, and consumers. “So we took a step back. We listened to the customers. We listened to industry leaders.” What they heard was that pesticide degradation wasn’t necessarily what they needed.

In searching for perspective, AgroSpheres discovered their most marketable innovation was found in the delivery platform they had created for their original pesticide degradation product. For example, they learned they could use this same class of enzymes and proteins to encapsulate pesticides and program them to better target plants. “The particle can stick to the leaf, so you can spray a lot less and less often.” 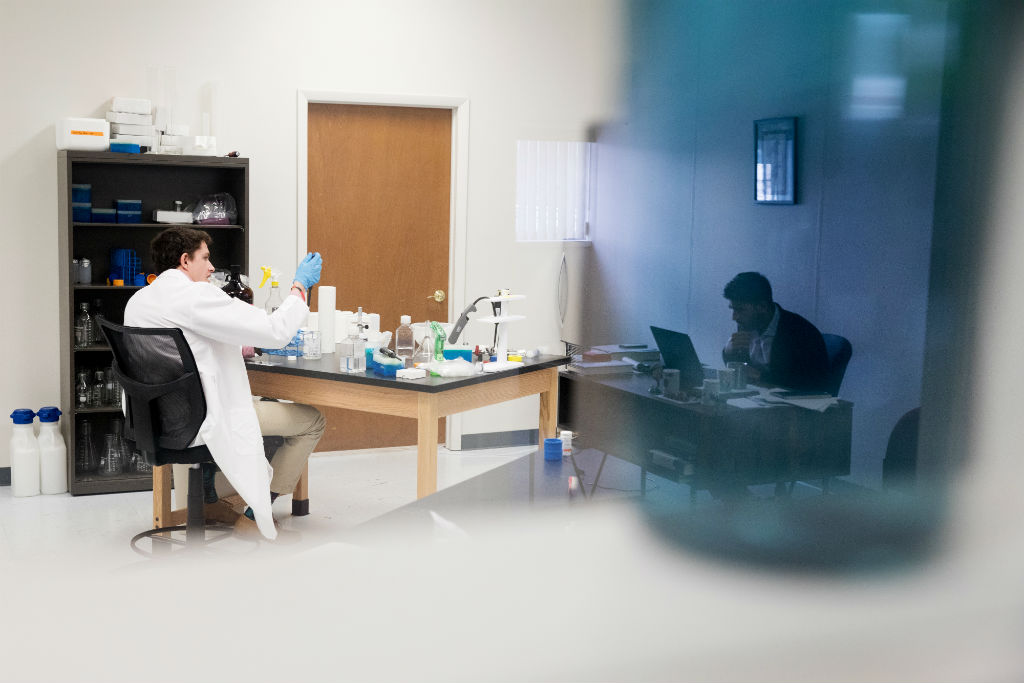 Joseph T. Frank conducts research in the lab as Ameer Shakeel, reflected in a water bottle, works across the hall on business needs.

The discoveries didn’t stop there. Payam says that from those tests, they realized they had a biological platform that can be toxic to certain bugs but leave beneficial insects, like bees, unharmed.

Making pesticide use safer by combining them with a biologically derived delivery platform is a more sustainable practice which the company can promote. The team has many accounts with industry partners to whom they provide encapsulated pesticides for limited and test use.

AgroSpheres has four pending patent applications on their initial technologies, simultaneously filed in the United States and with multiple international patent offices. Their proprietary processes, formulations, and techniques are also protected as trade secrets.

In summer 2017, the team moved into its own lab facilities in Charlottesville. They felt strongly about staying in the community where they developed their innovations and where they had already received so much support from both the university and local partners in the agriculture industry. They recruited Douglas Eisner to be AgroSpheres’ CEO and under his guidance, AgroSpheres has accelerated its drive to commercialization. 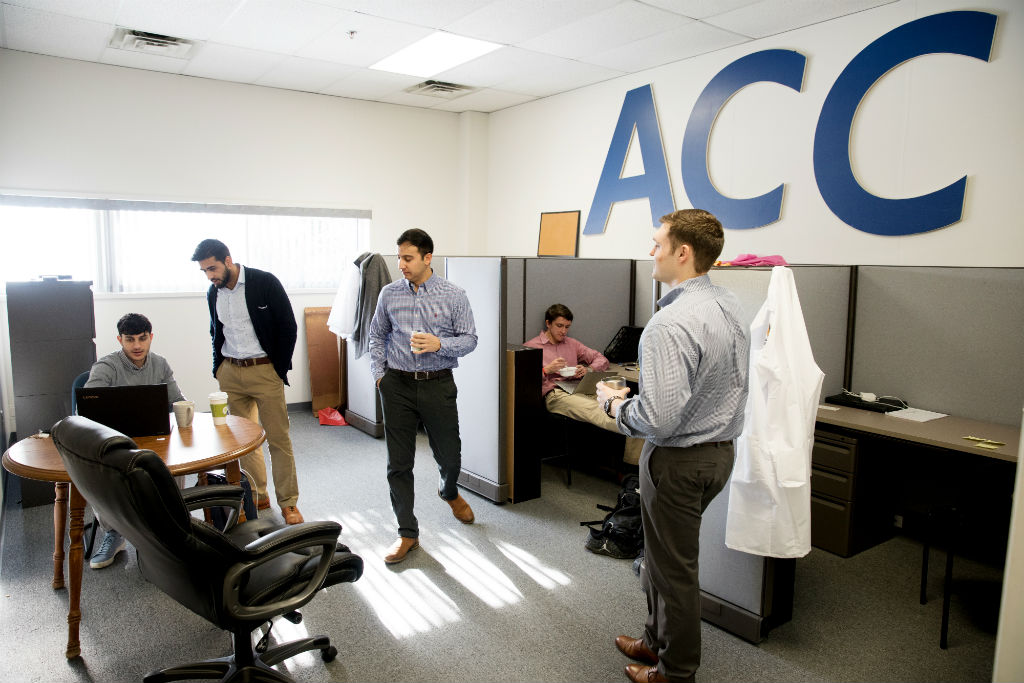 Sepehr Zomorodi, Ameer Shakeel, Payam Pourtaheri, Joseph T. Frank, and Zachery Davis begin their day discussing emails and work over coffee. On the wall above are the initials for the Atlantic Coast NCAA athletic conference, to which their alma mater, UVA, belongs. The team members are big supporters of UVA athletics.

As the chief operating officer, Payam handles day-to-day business and hones the company’s pitch to investors and partners. He has also become an expert in regulatory matters. As the chief technology officer, Ameer directs the research and technology development. Together, they keep the team focused and provide an environment where individual strengths can flourish while contributing to the momentum of the company. During staff meetings, each team member has a laptop in front of him, accessing scientific databases and bouncing questions and ideas off each other as fast as they can generate them. The synergy is remarkable.

Forging a strong bond has been a key to the team’s work success. Outside of the office, they go to the gym together, hang out, and play sports (particularly soccer).

“One thing we try to do is be conscientious of the fact that there are always going to be tough times,” says Ameer, “and we try to be supportive of each other when it's stressful for all of us. We do treat this like a small family over here.”

The team is also bound by their enthusiasm for the science and being in the lab, often working weekends and holidays in order to get the job done and push their products closer to market maturity. Payam says it best: “I'm too excited to fall asleep at night. I'm so ready for the next day.”

But perhaps what keeps them together the most is a shared vision for the future of the company and their ability to achieve good in the world. Sepehr says they see it at as a “moral imperative” to create technology that works toward sustainability, and their youthful perspectives and flexibility have so far allowed them to navigate critical obstacles on their way to commercialization. Whether it’s saving thousands of dollars by improvising equipment from common items purchased online, or letting go of one research direction to pursue one with more potential, the team brings generational insight into a field that is evolving at a rapid rate.

“We don’t have mindsets about how to do things,” says Sepehr, “and that opens up our toolbox.” 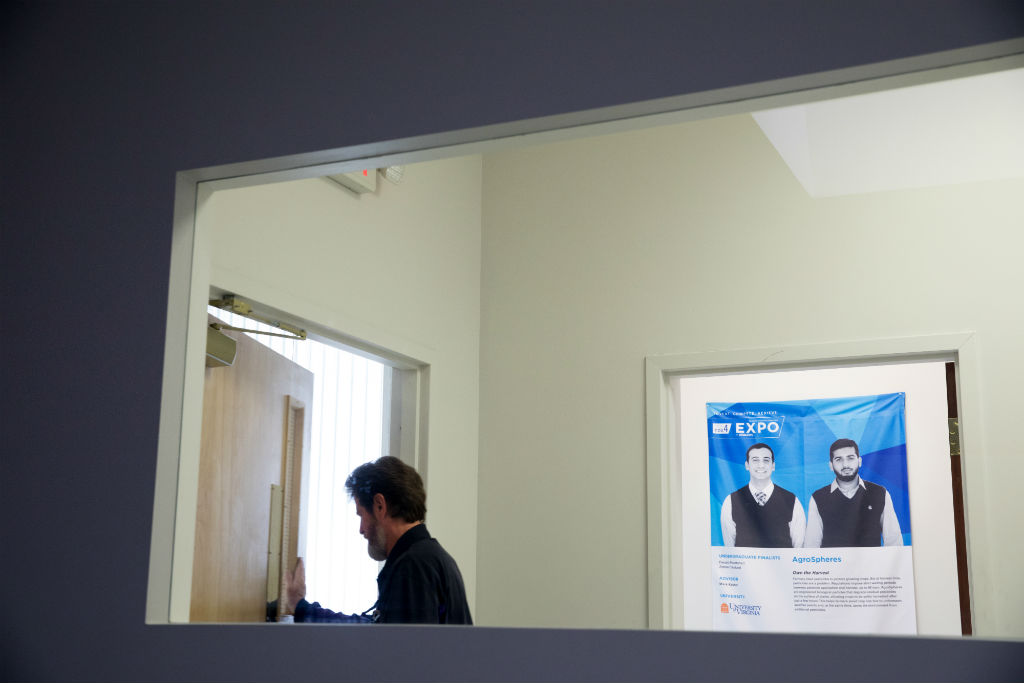 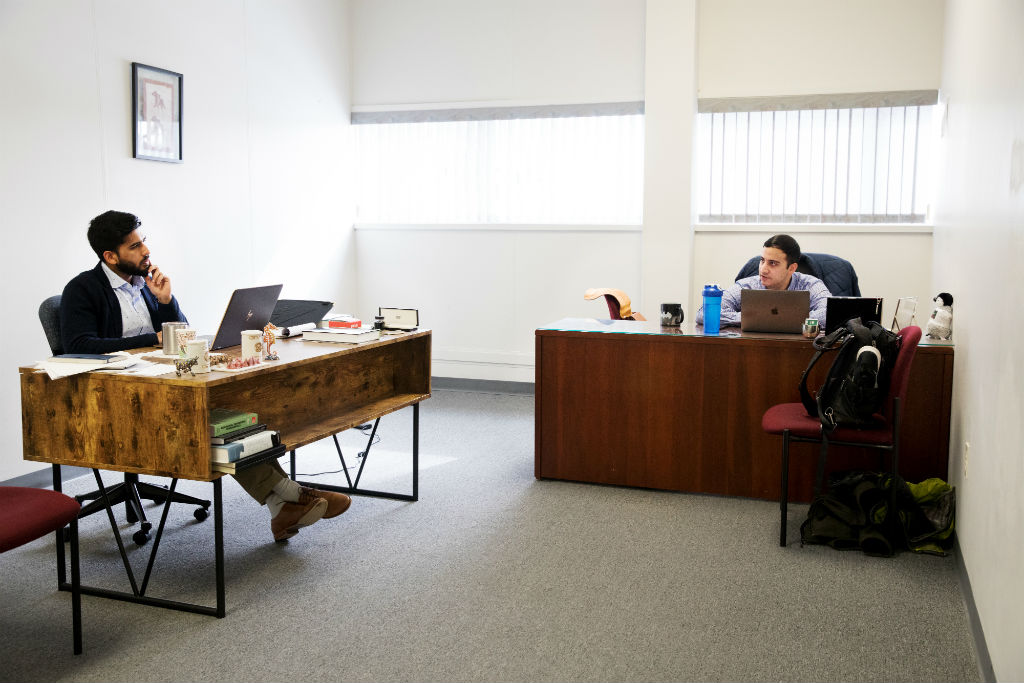 Left: A banner from the National Inventors Hall of Fame 2016 Collegiate Inventors Competition (where they were awarded a gold prize in the undergraduate category) hangs prominently at the entrance to the AgroSpheres office.
Right: Ameer Shakeel (left) and Payam Pourtaheri work, literally, closely together to run the company they founded after teaming up for a research project during their final year in college.

All innovation has an origin, but the path taken from that initial idea or problem is often unpredictable. For AgroSpheres, it took them to the USPTO not only for IP protection, but also to showcase their talent in the Collegiate Inventors Competition. For Payam and Ameer, the rest of their journey of innovation is unwritten. Right now, they get rewarded for following their instincts but also making their families proud—for taking risks and daring to dream in America.

This story was produced by the USPTO Office of the Chief Communications Officer. For feedback or questions, please contact OCCOfeedback@uspto.gov. 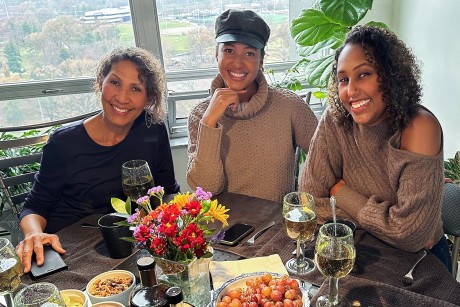 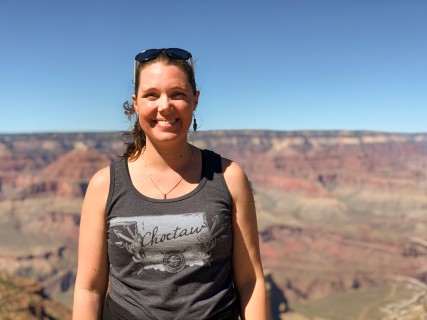 Conquering impostor syndrome >
Tara Astigarraga
Mentors and her first patent helped Tara, a member of the Choctaw Nation, realize her potential in STEM. Full Story >
Have a comment about the web page you were viewing?