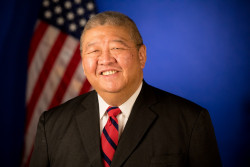 Conrad Wong is the intellectual property (IP) attaché based in Guangzhou, China. He was previously an attorney-advisor with the China Team of the United States Patent and Trademark Office’s (USPTO) Office of Policy and International Affairs (OPIA) in Alexandria, Virginia. In that role, he handled IP matters generally, as well as IP enforcement issues concerning China, Hong Kong, and Macau.

From 2007 to 2012, Mr. Wong was the IP attaché with the United States Consulate General in Guangzhou, China, where he had responsibility for U.S. IP issues in southern China and supervised the USPTO branch there. Based on his accomplishments, the USPTO selected him in 2019 to serve again in this capacity at the U.S. Consulate in Guangzhou.

Mr. Wong has 26 years of experience in IP matters, representing both the U.S. government and the private sector. In 1993, he joined the USPTO as a trademark examining attorney, subsequently became a senior attorney, and then joined the OPIA. He has also served as a government relations representative with the Specialty Equipment Market Association, a trade association representing the automotive and vehicle aftermarket industry.

A native of Palo Alto, California, Mr. Wong is a graduate of Johns Hopkins University and Georgetown University Law Center. Fluent in Cantonese, he is admitted to practice law in the District of Columbia and the State of Maryland. He is an avid enthusiast of classic American automobiles/automotive design.