Nominations now open for the National Medal of Technology and Innovation 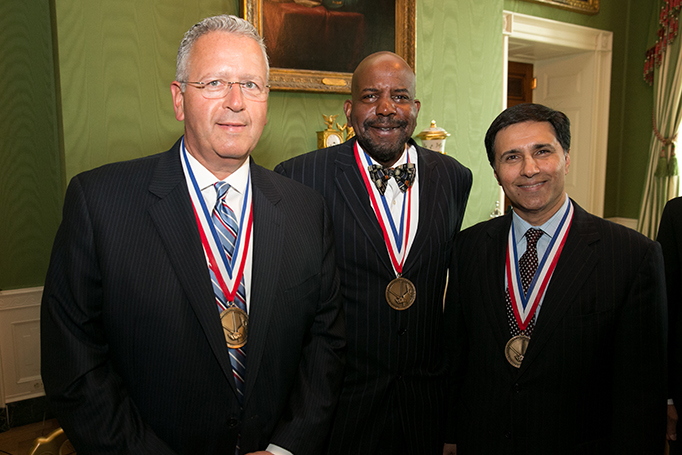 Nominations are now open for the 2020 National Medal of Technology and Innovation (NMTI) and will remain open until May 1, 2020. The NMTI is the nation’s highest honor to recognize those who have made great strides in advancing America’s competitiveness and quality of life and who have strengthened the nation’s workforce through technological innovations. Past winners include renowned inventors Steve Wozniak and Steve Jobs, whose imprint on modern technology is unmistakable.

The President of the United States presents this award annually to America’s leading technological honorees. As President Reagan expressed in 1985 during the first NMTI ceremony, each of the recipients of this award is recognized as a hero “just as surely as were Thomas Edison and Alexander Graham Bell.” This sentiment holds as true today as it did then. President Reagan went on to explain:

“The story of American technology is long and proud. It might be said to have begun with a blacksmith at his bellows, hammering out fine tools, and the Yankee craftsman using simple wood planes, saws, and mallets to fashion the fastest sailing ships on the ocean. And then came the railroad men, driving spikes across our country.

And today the story continues with the workers who built the computer in a child’s room; the engineers who designed the communications satellite that silently rotates with the Earth, shining in the sunlight against the blackness of space; and the men and women of skill and determination who helped to put American footprints on the Moon.”

The USPTO strives to share the stories of these NMTI laureates and others. As a part of the USPTO Speaker Series, for example, we recently welcomed to our headquarters Dean Kamen, inventor of the Segway® and founder of FIRST®, an organization inspiring young people to participate in STEM fields. Vint Cerf and Robert Metcalfe, two internet pioneers, also joined us for events like the Speaker Series and the Patent 10 Million unveiling. Jim West, inventor of the electret (modern) microphone, Cherry Murray, inventor of an optical data storage system for telecommunications, and Nobel Prize winner Frances Arnold, whose work focuses on making fuel and chemicals from renewable sources, have been featured in the USPTO Journeys of Innovation series. The role that intellectual property (IP) plays in these inventors’ transformative innovations underscores the importance of a strong IP system to our nation’s prosperity. 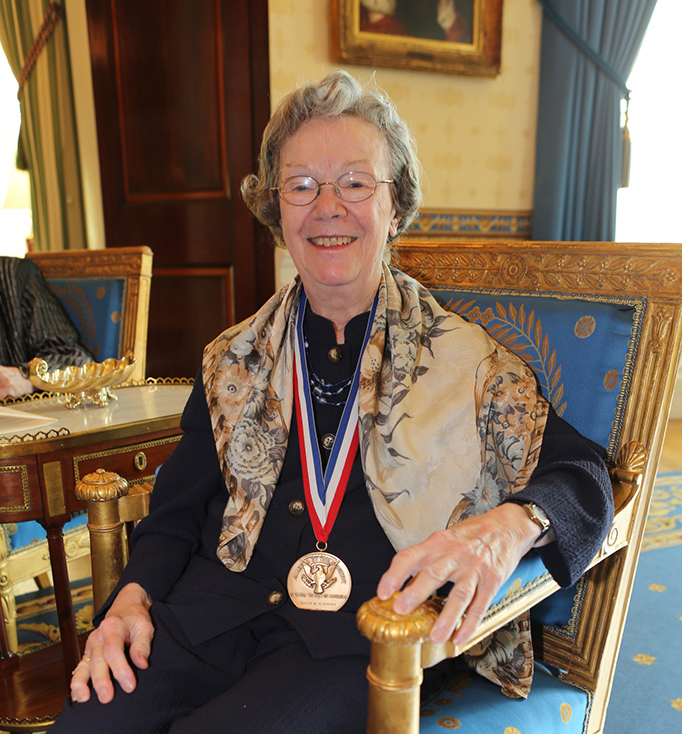 NMTI laureate Edith Flanigen received the award for her innovations in molecular sieves, which are used to purify petroleum, water, and countless other compounds. (Photo by Amando Carigo/USPTO)

If you are interested in submitting a nomination and would like more information, please watch the recorded webinar. We accept nominations for individuals, teams (up to four individuals), companies, and divisions of companies for their outstanding contributions to America’s economic, environmental, and social well-being. We invite a wide range of submissions that will demonstrate the incredible breadth of innovation taking place throughout all corners of the United States. Nominations of those from traditionally underrepresented groups are highly encouraged. Any nominee will remain under consideration for up to three consecutive years.

Initial selections will be made by the NMTI Nomination Evaluation Committee, which reviews nominations and makes recommendations to the Secretary of Commerce. The committee will then make recommendations to the President for final selection. Please contact the NMTI program staff for additional information. To receive announcements about NMTI, sign up for the USPTO Awards newsletter.


That's an impeccable selection of speakers. The words of wisdom will be invaluable. In regards to the webinar, will it be archived in a follow up blog post?

USPTO should do more to popularize STEM by organizing seminars and workshops, arranging meetings between NMTI laureates and students. NMTI laureates make America proud but unfortunately young generation is not aware about their contribution and huge potential of STEM.

USPTO ought to do a lot of to popularize STEM by organizing seminars and workshops, transcription conferences between NMTI laureates and students. NMTI laureates build America proud however sadly young generation isn't aware of their contribution and large potential of STEM.

USPTO should do more to popularize STEM by organizing seminars and workshops, arranging meetings between NMTI laureates and students. NMTI laureates make America proud but unfortunately, the young generation is not aware of their contribution and the huge potential of STEM.

USPTO should spread its work and publish its work by making it worldwide. I hope the coronavirus epidemic will end soon and congratulations on advance and good luck to the winners.