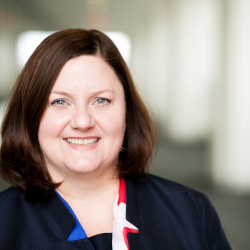 As the Regional Director of the Rocky Mountain Regional United States Patent and Trademark Office (USPTO), since January 2016, Mollybeth (Molly) Kocialski carries out the strategic direction of the Under Secretary of Commerce for Intellectual Property and Director of the USPTO, and is responsible for leading the Rocky Mountain regional office. Focusing on the nine states within this region and actively engaging with the community, Ms. Kocialski ensures the USPTO’s initiatives and programs are tailored to the region’s unique ecosystem of industries and stakeholders.

Ms. Kocialski brings more than 20 years of intellectual property experience to the USPTO. Most recently, Ms. Kocialski was the Senior Patent Counsel for Oracle America, Inc, where she was responsible for managing an active patent prosecution docket and was also responsible for all of the post-grant procedures and patent investigations for Oracle and its subsidiaries. Prior to Oracle, she worked at Qwest Corporation and was also in private practice in both New York and Colorado focusing on intellectual property litigation for multiple high-tech companies while maintaining an active prosecution docket.

Ms. Kocialski is a graduate of the State University of New York at Buffalo School of Law and received a Bachelor of Science in Chemical Engineering from the University of New Mexico. Ms. Kocialski is a registered patent attorney and is admitted to the U.S. Patent and Trademark Office, the New York and Colorado state bars as well as to the United States Courts in those jurisdictions.