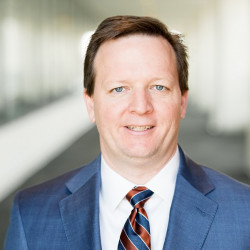 Jay Hoffman is the Chief Financial Officer (CFO) of the United States Patent and Trademark Office (USPTO). As CFO, Mr. Hoffman is the principal advisor to the USPTO Director in supporting and improving the accounting, budgeting, planning, contracting, and organizational performance systems of the USPTO. His responsibilities include managing the fiscal operations of the USPTO and providing leadership in areas defined by the Chief Financial Officers Act of 1990 and other legislation designed to improve integrity in federal financial management. Mr. Hoffman oversees an annual budget exceeding $3 billion.

Mr. Hoffman has more than 22 years of federal financial management experience, including more than 15 years as a member of the Senior Executive Service (SES). He has work experience at two cabinet-level federal agencies and an independent commission where he has led efforts for the U.S. government in support of major national goals including health and safety, energy technology, and economic recovery.

Mr. Hoffman previously served as the CFO for the U.S. Consumer Product Safety Commission (CPSC) for eight years where he was the principal adviser to the CPSC Chairman on all aspects of financial management. Prior to joining the CPSC, Mr. Hoffman served as the Director of Program Analysis and Evaluation at the Department of Energy for six years and was the Department’s first Performance Improvement Officer. He spent seven years at the Department of Treasury serving in a number of roles, including at the United States Mint, where he was the Budget and Planning Director.

Mr. Hoffman is a recipient of the Meritorious Presidential Rank Award given annually by the President to no more than 5% of the federal government’s SES in recognition of “sustained extraordinary accomplishment” throughout their executive tenure.

Mr. Hoffman has a Bachelor of Science in economics from the University of Nebraska and a Master of Public Administration from Indiana University. He is also a former Presidential Management Fellow and has attained a Certified Government Financial Manager certification by the Association of Government Accountants.