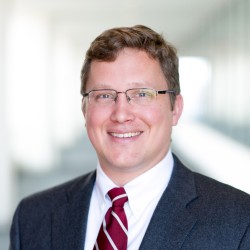 Prior to becoming Deputy General Counsel, Mr. Shewchuk spent eight years handling some of the USPTO’s most complex and challenging labor and employment law issues, first as Associate Counsel and then as Senior Counsel for Labor in the Office of General Law.

Mr. Shewchuk also worked for five years at the U.S. Federal Labor Relations Authority (FLRA), including as the agency’s Deputy Solicitor. In the FLRA Solicitor’s Office, he defended the agency’s decisions against challenge before U.S. Circuit Courts of Appeals. He has also worked as a litigation associate in private practice, with a focus on professional malpractice defense.

Mr. Shewchuk received his B.A. from the University of Virginia, and his J.D. from the College of William & Mary’s School of Law.