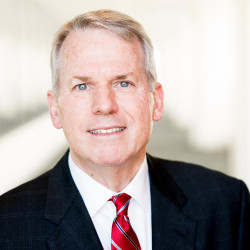 David S. Gooder is the Commissioner for Trademarks at the United States Patent and Trademark Office (USPTO). The Commissioner serves as the primary agency official for trademarks, domestically and internationally, and is responsible for all aspects of the Trademarks organization, including policy, operations, and budget relating to trademark examination, registration, and maintenance.

Mr. Gooder has worked for more than 25 years on intellectual property and brand-protection challenges facing iconic global brands, notably in the distilled spirits and wine industries. Prior to joining the USPTO, he served as the founding Managing Director and Chief Trademark Counsel at Jack Daniel’s Properties. Additionally, he was the Chief Trademark Counsel for Brown-Forman Corporation, which owns over 30 distilled spirits and wine brands. In that position, Mr. Gooder directed the company’s global intellectual property work, including its large trademark portfolio, rights clearance, brand protection (including anti-counterfeiting), licensing, and entertainment deals for the brands. Before that, Mr. Gooder practiced trademark, copyright, and entertainment law at Graham & James in Los Angeles and Luce Forward in San Diego.

Mr. Gooder has been an officer and served two terms on the Board of Directors for the International Trademark Association (INTA). He has also served as Chairman of the INTA Foundation. Prior to his legal career, Mr. Gooder was a drummer and a video and music director. He is also an Eagle Scout.

Mr. Gooder is a member of the State Bar of California. He received his Juris Doctor from the University of Arizona College of Law.