The National Medal of Technology and Innovation (NMTI) is the nation’s highest honor for technological achievement, bestowed by the president of the United States on America's leading innovators. There were 5 laureates in the 2008 class. 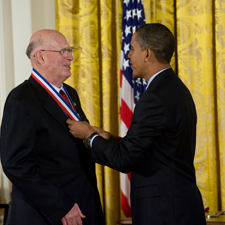 For his pioneering inventions in cardiopulmonary medicine, including the medical respirator; devices that helped launch modern-day medical evacuation capabilities; and intrapulmonary percussive ventilation (IPV) technologies, which have saved the lives of millions of patients with chronic obstructive pulmonary disease and other conditions. 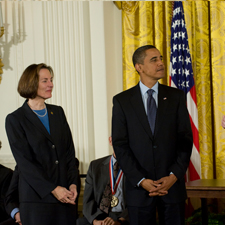 For her seminal development of the silver vanadium oxide battery that powers the majority of the world's lifesaving implantable cardiac defibrillators, and her innovations in other medical battery technologies that improve the health and quality of life of millions of people. 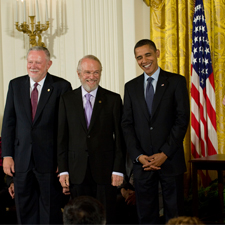 For their pioneering technological contributions that were central to spurring the desktop publishing revolution and for their role in changing the way people create and engage with information and entertainment across multiple mediums including print, video, and the Web. 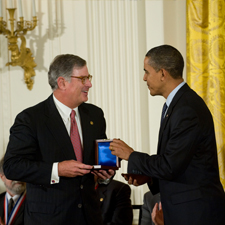 For the IBM Blue Gene supercomputer and its systems architecture, design, and software, which have delivered fundamental new science, unsurpassed speed, and unparalleled energy efficiency and have had a profound impact worldwide on the high-performance computing industry.