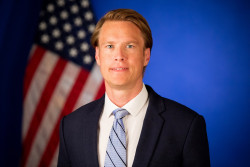 Dorian S. Mazurkevich is the regional intellectual property (IP) attaché for Azerbaijan, Armenia, Belarus, Georgia, Kazakhstan, Kyrgyzstan, Moldova, Tajikistan, Turkmenistan, Uzbekistan, Ukraine, Albania, Bosnia and Herzegovina, Kosovo, Macedonia, Montenegro, and Serbia. Based in the U.S. embassy in Kyiv, Ukraine, Mr. Mazurkevich works as the principal officer within U.S. embassies and consulates throughout the region on matters related to the protection and enforcement of IP rights.

Prior to his appointment, Mr. Mazurkevich was an attorney-advisor at the United States Patent and Trademark Office (USPTO), where he handled IP enforcement issues, including serving as liaison to INTERPOL’s Trafficking in Illicit Goods and Counterfeiting Sub-Directorate. Mr. Mazurkevich previously served as the first U.S. intellectual property attaché to Latin America, where he was based out of the U.S. consulate general in Rio de Janeiro, Brazil.

Prior to entering government service, Mr. Mazurkevich was a Fulbright scholar and visiting law professor at the National University of Kyiv-Mohyla Academy in Ukraine. He began his legal career as a patent attorney at Akin Gump Strauss & Feld LLP, and as a litigation attorney at Morgan, Lewis & Bockius, LLP.

Mr. Mazurkevich received a B.A. from the University of Pennsylvania and a law degree from Temple University School of Law. He also completed coursework at Harvard University’s Ukrainian Research Institute and the European Academy of Diplomacy in Warsaw, Poland.

During his U.S. government service, Mr. Mazurkevich has received numerous commendations, including the Department of State’s Meritorious Honor Award, the Franklin Award, and the Department of Commerce’s Kaminski Memorial Award for exceptional diplomatic skill and ability. He is a former Excellence in Government fellow.