A blog about the USPTO from the Department of Commerce

Today, April 26, the U.S. Patent and Trademark Office (USPTO) celebrates World Intellectual Property (IP) day in Washington, D.C., as well as across the country in Houston, Chicago and Silicon Valley. The World Intellectual Property Organization (WIPO) established World IP Day in 1999 to celebrate the important role of intellectual property, and the contributions made by creators and innovators around the globe. The theme of this year’s World IP Day is “Powering Change: Women in Innovation and Creativity.”

Consider, for example, Mary Dixon Kies the first woman to apply for and receive a U.S. patent in her own name. Her patent, issued May 5, 1809, was for a straw-weaving process that was widely used for over a decade. New England’s hat-making industry adopted her patented process, and First Lady Dolly Madison personally praised her invention and recognized the prosperity it helped bring to the region.

This afternoon we are holding a World IP Day program on Capitol Hill featuring three of today’s remarkable female innovators. Dr. Cherry Murray of Harvard University, Dr. Irina Buhimschi of Nationwide Children’s Hospital in Columbus, Ohio, and Danya Sherman, Founder of KnoNap,LLC, will discuss their innovations, how women have inspired them, and how they wish to empower fellow and future women innovators. The event is free and open to the public 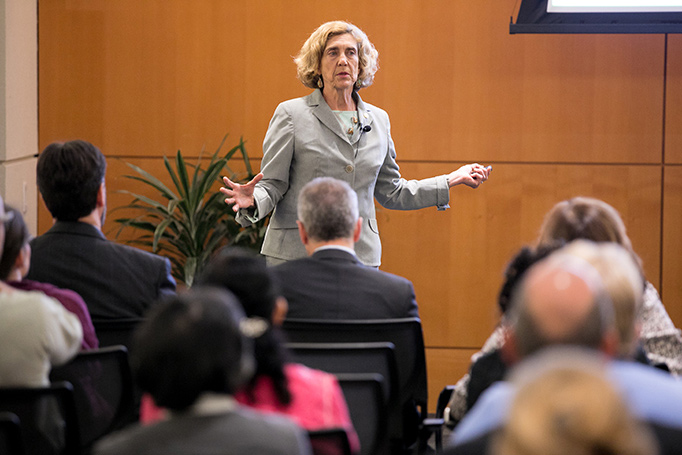 National Inventors Hall of Fame Inductee, Dr. Frances Ligler, talks to USPTO employees about her career, current research, and the importance of women inventors and innovators.

On April 24, we celebrated World IP Day with hundreds of USPTO employees at our headquarters and around the country with a keynote speech from Dr. Frances Ligler from the University of North Carolina at Chapel Hill and North Carolina State University. She holds 32 U.S. patents (and counting) and has commercialized 11 of those inventions. Inducted into the National Inventors Hall of Fame in 2017, Dr. Ligler invented portable optical biosensors, which are used in food production, health clinics, pollutant cleanup sites and military applications, including detecting botulinum toxin and anthrax during Operation Desert Storm. During the event, Dr. Ligler discussed her career at the Naval Research Laboratory and her current research, as well as her insights about women as inventors and innovators.

I also invite you to watch this special video featuring Dr. Ellen Ochoa – inventor, NASA astronaut, and Director of the Johnson Space Center – about the importance of women in innovation as well as her thoughts on mentorship and leadership.

From the 19th century economy of New England to the International Space Station orbiting the Earth, women continually shape the innovation landscape, playing a critical role in improving our way of life and enhancing our country’s economic prosperity. Their work reminds us that every day is IP Day, an opportunity to celebrate the creativity and innovation of people from all walks of life.