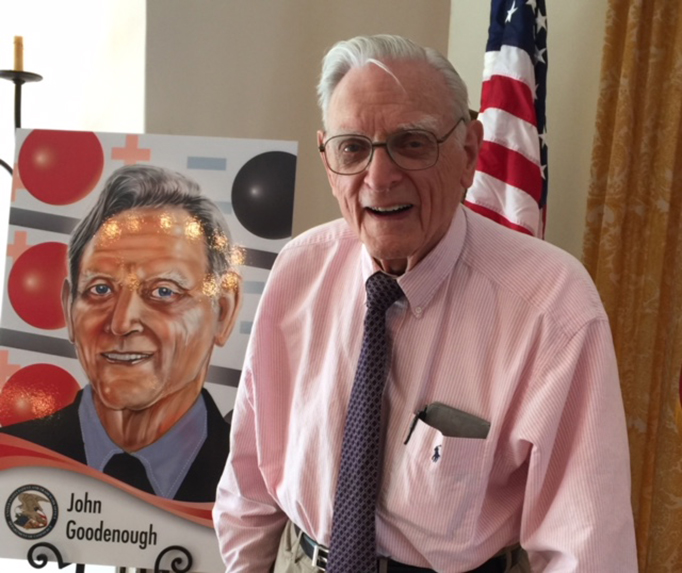 Nobel Prize winner John Goodenough with his inventor collectible card presented to him by the USPTO in 2018.

December 10 is Nobel Prize Day, the day on which Nobel Prize laureates are awarded their medals by the Royal Swedish Academy in Stockholm, Sweden. On behalf of the USPTO, I congratulate this year’s Nobel Prize in Chemistry winners John B. Goodenough, M. Stanley Whittingham, and Akira Yoshino. These inventors have made valuable contributions in the field of electro-chemistry, leading to the development of lithium-ion batteries.

This year’s Nobel Prize winners are truly among the most deserving giants of the scientific and inventive worlds. Their journeys of innovation inspire and awe us. By unlocking some of the fundamental mysteries of electro-chemistry over the past decades, they have transformed and improved our world by empowering us as well as many of the things we rely on every day, including our smartphones, pacemakers, and even orbital satellites.

As the Royal Swedish Academy of Sciences stated in its press release for this year’s Nobel Prize in Chemistry, the invention of lithium-ion batteries has created the conditions for a “wireless and fossil fuel-free society” and thus provided a significant benefit to humankind. And we look forward to even more innovations in the future that build on the foundations that Goodenough, Whittingham, and Yoshino have laid.

The 2019 Nobel Prize recipients hold prominent academic and corporate positions. Goodenough is the Virginia H. Cockrell Centennial Chair in Engineering at the University of Texas at Austin. To commemorate his extraordinary career, the USPTO honored him with an inventor collectible card in 2018. Whittingham is a distinguished professor at Binghamton University in Binghamton, New York. Yoshino is a fellow of the Ashahi Kasei Corporation and a professor at Meijo University in Nagoya, Japan.

Each of the three winners are also accomplished inventors and owners of U.S. and international patents. The Royal Swedish Academy of Sciences, which awards the Nobel Prize in Chemistry, cited U.S. patent nos. 4,357,215 (fast ion conductors) and 4,668,595 (secondary battery) in the Scientific Background on the Nobel Prize in Chemistry 2019. Goodenough was the primary inventor on the former patent, and Yoshino on the latter. In total, Goodenough is listed as an inventor on 27 U.S. patents, Whittingham on 17 U.S. patents, and Yoshino on 83 U.S. patents.

The USPTO celebrates the accomplishments of these three remarkable inventors, as well as all inventors who, thorough their creativity and persistence, make the world a better place.


I think advancements in hydrogen electro-chemistry is even more significant than Lithium-ion technology.

The rapid growth of lithium ion technology has opened doors unavailable in just the recent past. High torque cordless tools at a remote location to build life saving shelters from harsh elements in 3rd world countries is a reality today. We are still in the infancy stages i believe. What was only written in science fiction books by authors like the master, Issac Asimov some 40 years ago is now in every kids hand that has a cell phone that they take for granted. Little do people comprehend what strides and failures had to take place for we humans to get to "Now". Fascinating and in live time we get to watch the inventions grow in our lifetime. L

The rapid growth of technology in a very big era ... Even children now have their own cellphones ... people don't understand what steps to take when a failure has occurred.... much appreciated! This was very much useful. Please let me know when you publish a new post. Great job for publishing such a beneficial article.

John Goodenough is an awesome person. I had read several books such as Solid Oxide Fuel Cell Technology, Witness to Grace and many more. Yes, it is necessary to develop electro-chemistry because of our demand. This is an era of nano-technologies.

John Goodenough is a very good man as well as outstanding engineer. Applause

Thank you John Goodenough for your work, thanks to you, a breakthrough in this technology will save the world!