A post about the USPTO from the Department of Commerce. 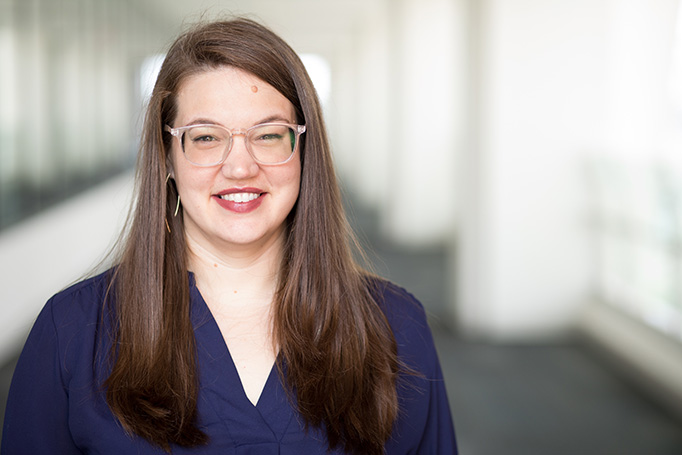 After earning my engineering degree and serving in the Navy for seven years, the next logical step in my career was to take a position as a writer-editor. Sounds disjointed? It's a more natural progression than you might think.

Growing up, I loved math and science. Math homework was my favorite! It was so satisfying to start with a few numbers and a question, then figure out what to do with those numbers to find the answer. In science classes, I asked enough questions to try the patience of both my teachers and fellow students. Predictably, I went to college to be an engineer. I studied biomedical engineering at the University of Rochester. It was fascinating to learn about how the human body works and how the biomedical field uses technology to make it work better. I couldn't wait to graduate and use my skills to build things that would solve real-world problems.

As graduation grew closer, though, I decided I wanted to explore the world of engineering from a different perspective. So, I joined the Navy to study and work in nuclear propulsion. In my training, I learned how the Navy harnesses fission to move ships. It was staggering to learn about a system that starts with a few neutrons zooming around and ends with an aircraft carrier zooming through the ocean. Again, I was awestruck at how engineering gives us systems that are cohesive, despite their complexity, to elegantly solve the world's problems.

During my time in the Navy, in addition to studying nuclear power, I was also a division officer. That meant that I bridged the gap between the command's leadership and the sailors in my division. Despite being on the same ship, those two groups had dramatically different needs and perspectives. Leadership focused on accomplishing the ship's mission and keeping the ship and crew safe. My sailors, on the other hand, were concerned about maintaining and operating a complicated weapon system. When those priorities were at odds, fulfilling my role as a liaison could be quite challenging. I quickly learned that in any form of communication, it's vitally important to start by understanding the needs and perspectives of the other person. The only way to reach them is to shape your message with those needs in mind. Ignore those needs, and you'll fail. For me, a few big failures helped me learn the lesson. Seven years of smaller failures helped me hone the skill, which is fundamental to effective communication.

These experiences laid the groundwork for my career as a writer-editor at the USPTO. My focus in writing and editing is plain language. That doesn't mean that I dumb things down or that I make every piece of content understandable to the general public. It means that I write and edit so my audience can easily find, understand, and use the information they need.

Even if you have a clear understanding of your audience, though, writing clearly can still be quite challenging. There are many obstacles to overcome. Sometimes, you're writing to multiple audiences who have vastly different needs. Sometimes, your organization's needs conflict with your audience's needs. Legal topics add another layer of obstacles. Sometimes, when you explain legal concept in the most straightforward way, you get a statement that's only true 99% of the time, making it legally inaccurate. Communicating clearly despite these roadblocks can be difficult, but it's possible. My job is to do just that, and it's my favorite part of writing and editing. Thinking outside the box to find ways to communicate clearly within these constraints is, dare I say, fun. I never expected words to be my medium for solving problems as an adult, but it's just as satisfying as the problem sets I loved as a kid.

My job is to serve Americans by making the information they need more accessible, using words to solve problems along the way. Though I thought I'd grow up to be a distinguished scientist or brilliant inventor, now I know that it's just as fulfilling to be a word engineer.

Ed. note: This post is part of the Spotlight on Commerce series highlighting the contributions of Department of Commerce military veterans in honor of Veterans Day.


I love your creative career path! I too combined engineering and communications skills to end up in intellectual property law.