During National Military Appreciation Month, we recognize the role that innovation has played in America’s military strength and honor the service and sacrifice of our men and women in uniform.

On May 2, we celebrated the 2019 National Inventors Hall of Fame (NIHF) inductees at the National Building Museum in Washington, D.C. Andrew Higgins, the inventor of the LCVP (Landing Craft, Vehicle, Personnel) known as the “Higgins Boat,” was among the notable inventors honored. Most people recognize the Higgins Boat as the amphibious craft used to land American troops and equipment on the beaches of Normandy and the shores of Iwo Jima. In partnership with the NIHF museum, here at the USPTO headquarters in Alexandria, Virginia, we have an actual Higgins Boat on display until the end of July. Visitors are encouraged to board the craft and learn about the “boat that won the war.” The NIHF Museum, also located at the USPTO, offers American flags for visitors to plant near the exhibit to honor the service of our nation’s veterans. 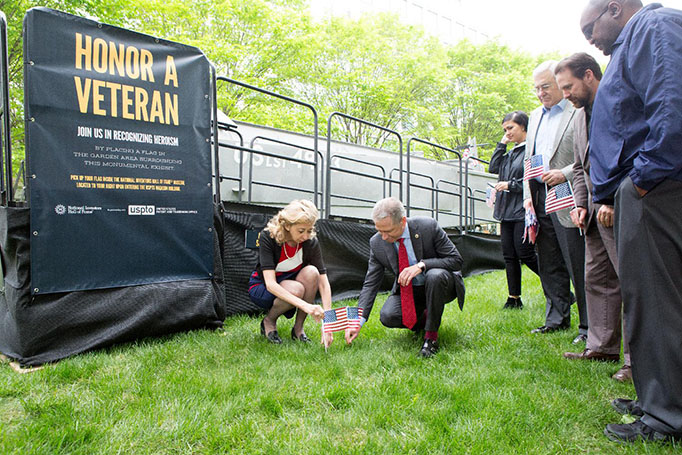 The USPTO is strongly committed to hiring veterans. The qualities the military teaches, in addition to the diverse experiences service members have, means that veterans have a great deal to bring to any team. That is why the USPTO has a robust veterans hiring program. Since the program’s inception in 2012, the USPTO has hired about 800 veterans or transitioning service members, which accounts for 6% of our agency’s total workforce. Our veterans tell us how proud they are that by joining the USPTO after active duty, they can continue to serve their country by protecting American assets – in this case, intellectual property. Veterans contribute to our mission in the areas of science and engineering, information technology, contracts, procurement, finance, administration, project and program management, and customer support. Each day, I see these men and women bring to their work at the USPTO the same spirit of selfless service and love of country that led them to serve in uniform.

On May 23, I and other USPTO employees participated in our annual Memorial Day observance, organized by the USPTO Military Association, which includes the Walk of Thankful Recognition, from USPTO headquarters to the Alexandria National Cemetery. Each participant was provided a card describing the life of a veteran buried at the cemetery and encouraged to pay his or her respects at the gravesite. As always, this was an extremely meaningful and moving event.

This Memorial Day, we join with the rest of our citizenry to honor and remember those who have served and those who have sacrificed for our nation. On behalf of the USPTO, we thank the inventors whose ideas keep our military on the cutting edge, as well as the proud men and women who served in our armed forces.