A blog about the USPTO from the Department of Commerce. 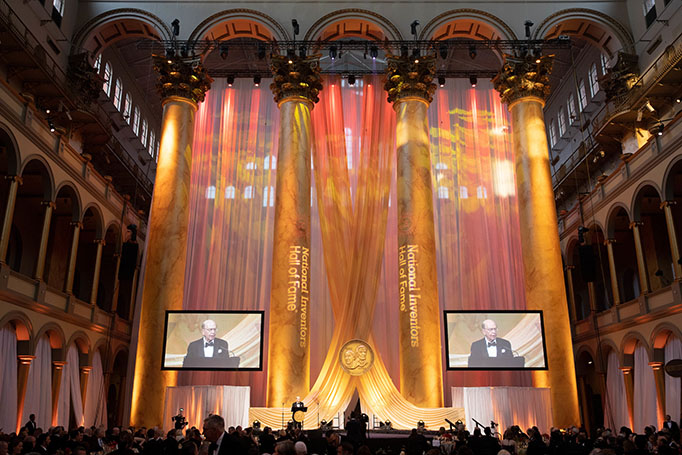 Secretary Ross spoke at the National Inventors Hall of Fame induction ceremony on May 2, 2019 at the National Building Museum in Washington, D.C. (Photo by Jay Premack/USPTO)

Last week, U.S. Commerce Secretary Wilbur Ross joined the United States Patent and Trademark Office (USPTO) in inducting nineteen of America’s greatest inventors into the National Inventors Hall of Fame (NIHF) which was held at the historic National Building Museum in Washington, D.C. At the event, Secretary Ross addressed the important role that innovation plays in transforming and advancing our society.

The inductees’ patented innovations revolutionized their industries and changed people’s lives. Those honored included Chieko Asakawa for creating accessible technology for visually disabled individuals; David Walt for developing microwell arrays that could analyze thousands of genes simultaneously; and S. Duncan Black and Alonzo G. Decker for laying the foundation for the modern power tool industry with their invention of the portable hand-held electric drill.

At the ceremony, Secretary Ross stated, “For those being inducted today, we greatly admire your grit in persevering through the trials and errors needed to turn your ideas into reality, and for your contributions to humanity.” Read Secretary Ross' full remarks.

USPTO Director Iancu stated, “When we humans harness that most unique of human qualities—the power to reason, to work together, to invent, to create—we are capable of the most remarkable things. That is what inventors do, and that is what we celebrate tonight.” Read Director Iancu’s full remarks.

In partnership with the USPTO, the National Inventors Hall of Fame has impacted 2.2 million children, educators, college students, and inventors since 1990, and 200,000 in 2018 alone. To be inducted into the National Inventors Hall of Fame, one must hold a U.S. patent, as well as contribute significantly to the nation's welfare and the advancement of science and the useful arts. NIHF was established in 1973 to honor U.S. patent holders whose inventions created new industries that employ millions of people and helped to stimulate economic growth for our nation and beyond.

View a complete list of the honorees and the stories behind their inventions online.