A conversation with Kareem Abdul-Jabbar at the 2018 Trademark Expo 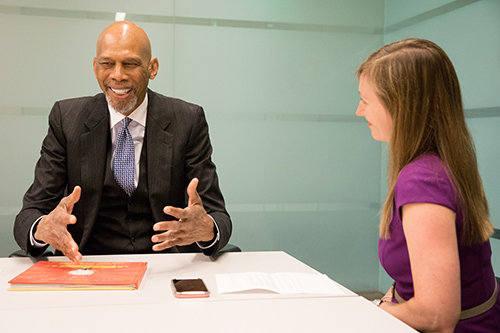 Kareem Abdul-Jabbar, NBA legend, businessman, and a registered trademark  owner, shared his thoughts on African American inventors and the importance of intellectual property with the USPTO’s Linda Hosler on July 27. In his brief interview with the USPTO, Abdul-Jabbar said, “… science, technology, engineering and math really are the foundation for all of the good jobs where young people should focus,” which is part of the mission at his foundation, Skyhook. Photo by Jay Premack/USPTO.

On July 27 and 28, guests poured in to the Smithsonian’s National Museum of American History to participate in the 2018 National Trademark Exposition. This free biennial event supports the USPTO’s mission of educating the public about the vital role intellectual property protections—in this case trademarks— play in our increasingly competitive global marketplace. More than twenty exhibitors, including government entities, non-profits, small businesses, and corporations from all over the country provided thought-provoking interactive displays and educational workshops.

Keynoting at this year’s expo was NBA All-Star, author, and entrepreneur, Kareem Abdul-Jabbar. I had the opportunity to sit down with Abdul-Jabbar to find out what made him the industry giant he is today—not surprisingly, it is much more than his 7 foot 2 inch stature.

Note: The transcript below is edited for length and clarity.

[Linda Hosler] Could you start by telling me a little bit about how you think we can spark innovation?

[Kareem Abdul-Jabbar] I think the saying really holds true that necessity is the mother of invention. So people get it in their mind that they have a problem that needs to be solved, and they put a lot of thought into how to get something done easier, quicker, safer, and asking: “how do you improve a situation?”

[LH] With that in mind—that necessity is the mother of invention—could you talk about a time in your life where you had to overcome a barrier?

[KAJ] Oh yeah. Retiring really presented me with a whole set of situations. You can’t just sit around all day and think about how many points you scored against the Denver Nuggets. You’ve got to do something with your life.

Writing and history were two of my passions. So, I put pen to paper, and I wrote the history book that I felt needed to be written. It's called “Black Profiles in Courage.” And I just went from there. It was one step after the other. And that's how my writing career evolved.

[LH] That's fantastic. Regarding one of your other books, “What Color is My World?: The Lost History of African-American Inventors”, why did you pick to talk about African-American inventors? Have you always been interested in science and technology?

[KAJ] I just started to write about the things that I felt needed some attention. So for me, the contributions that Black Americans have made to America that go unacknowledged and under-reported was my focus. So I ended up with this book.

It is really important for me to connect with kids who don't understand what their legacy is, and preparing them to be productive citizens. People are always shocked when they found out that a black person invented the ice cream scoop, or potato chips, or the filament that made electric lighting possible. 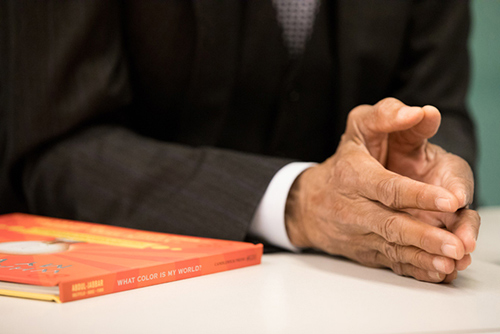 Kareem Abdul-Jabbar's book, "What Color is my World?: The Lost History of African-American Inventors” highlights the contributions Black Americans have made to America in a relatable format for young people. Photo by Jay Premack/USPTO.

[KAJ] Well, I think as an athlete nobody can challenge your unique identity. But when you step away from the game, it's really important that people understand who you are when you enter the marketplace. My name, image, and likeness are things that have enabled me to make a living. So, you know, you have to protect that.

[LH] What advice do you have for other entrepreneurs and innovators?

[KAJ] Geez, it's hard for me to advise anybody. I don't know their circumstances. But I think having a plan for what you want to do is always the first step. Things don't just fall out of the sky. You have to really understand who you are and where you want to go. So that whole process of self-examination, I think, is a good starting point for people who want to be entrepreneurs. 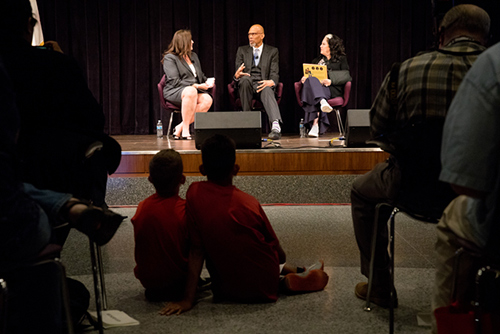 Moderated by the Vice President of Global Divisional Communications for Hologic Jane Mazur, NBA all-star Kareem Abdul-Jabbar and his business manager Deborah Morales discussed how celebrities build and maintain their brands at the 2018 National Trademark Exposition. Photo by Jay Premack/USPTO.

[LH] What about a young person who reads your book and is inspired by it? What advice would you give them?

[KAJ] Follow your dream. Understand what your passion is and try to follow that. A lot of young people think, “Oh, I can't do that.” That's usually where they come from, because they know very little about the world and their own potential. So you have to impress upon young people that they have tremendous potential, but it takes work to realize some benefits from it.

[LH] I think we’re almost out of time. So, before we close, could you tell us a bit about your non-profit, the Skyhook Foundation?

[KAJ] The mission is to get young people to understand where the good jobs will be in the 21st century. So science, technology, engineering and math really are the foundation. And the most important aspect of it is getting them to understand that they can do it. Too many kids see technology as something for other people from other parts of the world, and they don't realize that they can do it here in our country. We focus on the fourth and fifth graders and we try to help them to focus on success from an early age.

A special thank you to Kareem Abdul-Jabbar for sharing his insights. You can learn more about trademark protection on the Trademarks page of the USPTO website.