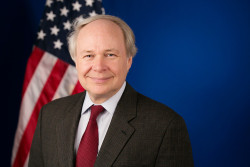 As the Deputy Commissioner for Patent Operations, Andrew Faile is responsible for coordinating the examination of approximately 600,000 patent application filings annually, including proper execution of examination practice and procedure, as well as ensuring timely and quality customer service to our external stakeholders. He leads five Assistant Deputy Commissioners, 30 Technology Center (TC) Group Directors across nine Patent Technology Centers, the Central Reexamination Unit, over 600 Supervisory Patent Examiners and more than 8,000 highly skilled scientists, engineers, and design examiners, as well as support service employees to facilitate examination of applications. Andy was the Assistant Deputy Commissioner for Patent Operations for the Electrical Discipline and has 30 years of experience in patent examining and operations management. He first joined the USPTO in 1989 as a patent examiner in the areas of cellular telephony, radio frequency communications, and cable television. In 1994, he earned an examiner master’s rating in telecommunications. He was awarded the Department of Commerce Silver Medal for his work on a joint management/union task force in charge of modernizing the examiner production system, and in 2014 was awarded the Presidential Meritorious Rank Award.