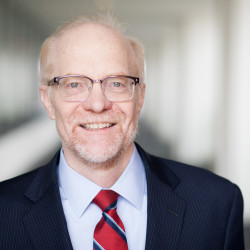 As Deputy General Counsel for Intellectual Property Law and Solicitor, Thomas Krause leads a team of litigators who defend the Director of the United States Patent and Trademark Office (USPTO) and the agency in court proceedings relating to intellectual property issues.

Mr. Krause has worked for the USPTO in the Solicitor’s Office since 2002, serving as Associate Solicitor, Special Counsel for Intellectual Property Litigation, Deputy Solicitor, and Acting Solicitor. In those roles, Mr. Krause has extensive experience defending USPTO decisions in federal court, briefing and arguing numerous patent cases before the U.S. Court of Appeals for the Federal Circuit, supervising district court litigation, and assisting the Solicitor General’s office in U.S. Supreme Court cases involving copyrights and patents. He also led the Solicitor’s Office copyright team and provided advice and guidance to the agency on copyright and patent issues.

Before joining the USPTO, Mr. Krause practiced patent law as Special Counsel with Covington & Burling, where he specialized in patent litigation and prosecution. Prior to that, he served as a judicial law clerk to Judge Alex Kozinski on the U.S. Court of Appeals for the Ninth Circuit.

Mr. Krause graduated Phi Beta Kappa with high distinction in mathematics (B.S.) from the University of Illinois. Prior to attending law school, Mr. Krause served as an officer with the U.S. Navy on a fast attack submarine, and qualified as a Naval Nuclear Engineer. He received his Juris Doctor, with honors, from Harvard Law School, where he served as executive editor of the Harvard Law Review.