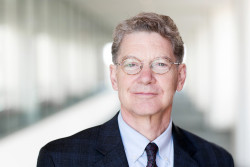 Gerard Rogers is the Chief Administrative Trademark Judge of the Trademark Trial and Appeal Board (TTAB). He was appointed to the position in November 2010 after serving a year as Acting Chief Judge.

The TTAB Chief Judge reports directly to the Office of the Under Secretary and Director of the USPTO, and is responsible for all ongoing operations of the TTAB, as well as strategic planning for future operations.

The TTAB hears and decides appeals by trademark applicants from final refusals of registration issued by USPTO examining attorneys; oppositions brought by outside parties to challenge applications approved by examining attorneys; petitions filed by outside parties to cancel trademark registrations issued by the USPTO; and determines geographic division of territories for marks involved in concurrent use proceedings.

Before taking on responsibility for TTAB operations, Chief Judge Rogers spent 10 years serving as one of the board’s judges, sitting on panels to hear appeal and trial cases, and authoring final decisions in such cases.  He also was the primary author of a package of rule changes issued in 2007 that changed the ways in which trial cases at the TTAB are prosecuted and defended.

Chief Judge Rogers began his career at the USPTO in December 1987 as a Trademark Examining Attorney, served as a staff attorney for the Assistant Commissioner for Trademarks, and joined the TTAB as an Interlocutory Attorney in 1992.  He was named a judge of the TTAB in 1999.

A graduate of the University of Massachusetts at Amherst, Chief Judge Rogers earned his J.D. from New England School of Law.