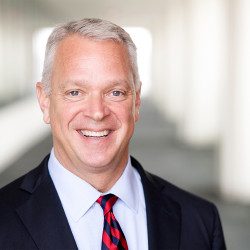 Fred Steckler is the Chief Administrative Officer for the U.S. Patent and Trademark Office (USPTO). He is responsible for the delivery of all administrative service support functions for USPTO including human capital strategy, human resource management, telework policy and programs, facilities management, safety and security, transportation, asset and records management.

Mr. Steckler joined USPTO from the consulting firm Booz Allen Hamilton, where he served as an Executive Advisor in the Organization and Strategy Team's Human Capital and Learning Practice. Prior to Booz Allen, he was the Director of Account Development and Management for the Government Consulting Services Unit of Watson Wyatt Worldwide. Before Watson Wyatt, Mr. Steckler served as the General Deputy Assistant Secretary for Administration and Deputy Chief Information Officer at the U.S. Department of Housing and Urban Development (HUD). In addition to HUD, he has held consulting and business operations positions with IBM and Coopers & Lybrand. Mr. Steckler also served as the Executive Director of Northern Virginia AIDS Ministry, a non-profit community service organization in Northern Virginia.

Mr. Steckler began his career as a shipboard officer in the U.S. Navy and was a member of the commissioning crew of the USS Vandegrift (FFG-48). He later served as Second Company Officer and then Executive Assistant to The Commandant of Midshipmen at the United States Naval Academy.

Mr. Steckler received a Bachelor of Arts degree in economics from Duke University and a Master of Business Administration from The George Washington University.