2021 WES: Pathways to invention, entrepreneurship, and STEM careers for students K-12 and beyond – Speaker biographies 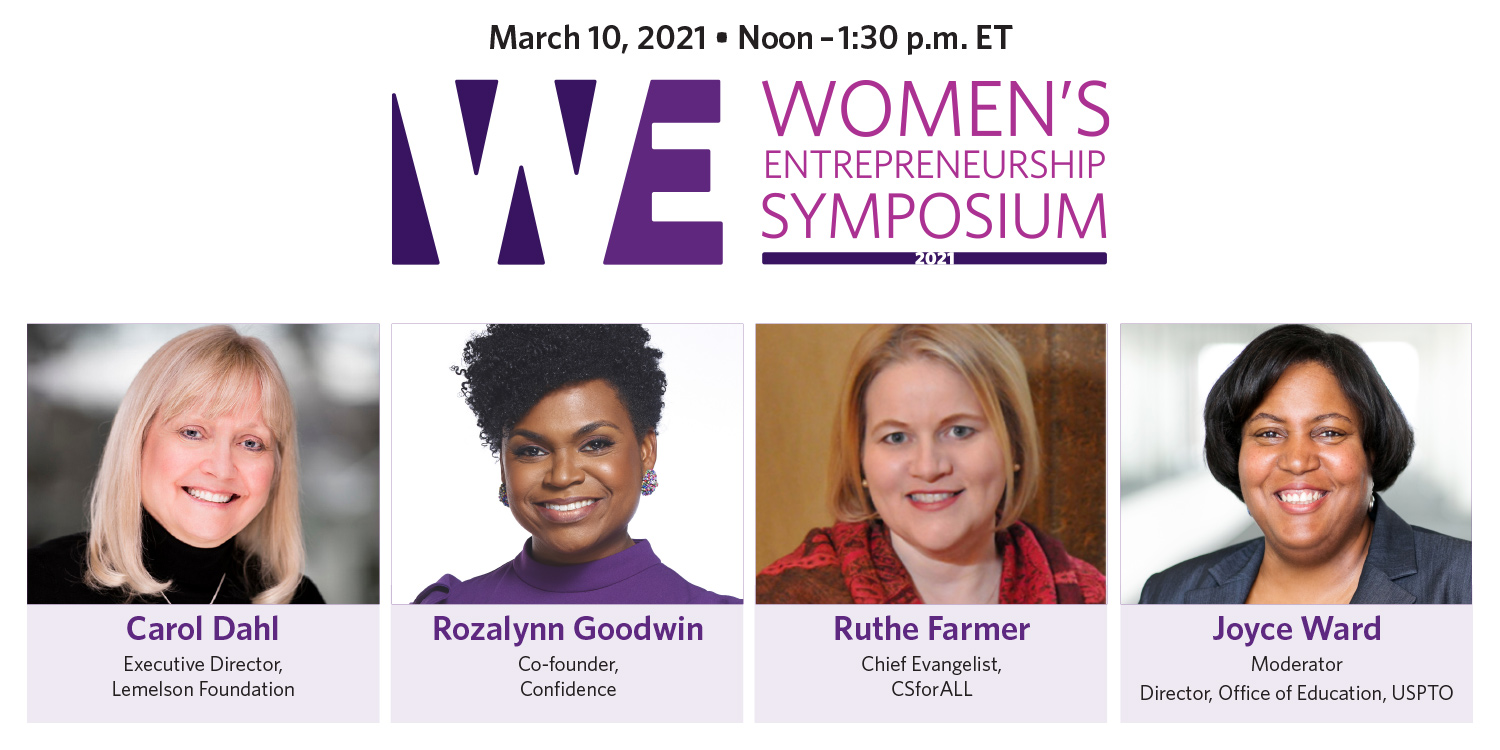 Joyce Ward is the Director of the USPTO’s Office of Education (OE). Her work expands the influence of the agency’s outreach offerings to provide K-12 educators and students with unique learning experiences and resources that integrate knowledge of invention, innovation, entrepreneurship, and STEM. Her office encourages the creation and protection of intellectual property.

Under Ward’s direct leadership, the OE successfully conceived and implemented numerous projects that have garnered national recognition for the agency, including the Science of Innovation series, a collaboration between the USPTO, the National Science Foundation, and NBC Learn; the exemplar National Summer Teacher Institute on Innovation, STEM, and Intellectual Property (NSTI); an intellectual property patch with the Girl Scouts organization; and the first USPTO Inventor Trading Card series.

Prior to her current position, Ward was the Director of Program Support and Intellectual Property for the National Inventors Hall of Fame (NIHF). Before going to NIHF, she served as a trademark examining attorney and later as an education specialist in the Office of Public Affairs at the USPTO. Ward received her undergraduate degree from the University of North Carolina at Chapel Hill and her law degree from the Georgetown University Law Center in Washington, D.C.

Dr. Carol Dahl is the Executive Director of The Lemelson Foundation and leads the Foundation’s work to use the power of invention to improve lives. The Foundation inspires and enables the next generation of inventors and invention-based enterprises to promote economic growth and address critical challenges in the U.S. and to help solve social and economic problems for the poorest populations in low and middle-income countries.

Prior to joining the Foundation, Dahl was founding Director of the Global Health Discovery Program at the Bill & Melinda Gates Foundation and led development of the Grand Challenges in Global Health and Grand Challenges Explorations programs. Previously, Dahl worked at the U.S. National Institutes of Health at the National Cancer Institute and National Center for Human Genome Research, at a start-up diagnostics company, and on the faculty of the University of Pittsburgh. She received a bachelor's degree from the University of Iowa and master’s and doctoral degrees from the University of Wisconsin.

Dahl currently is Chair of the Nomination Evaluation Committee for the U.S. National Medal of Technology and Innovation, Commissioner on the National Commission on Innovation & Competitiveness Frontiers of the Council on Competitiveness, a member of the Oregon Futures Commission, Chair of the Program Advisory Committee for Grand Challenges Canada, and a member of the Advisory Board for the Fogarty International Center at the National Institutes of Health.

Ruthe Farmer is a national advocate for gender equity and has focused her efforts on diversity in technology and engineering since 2001. At CSforALL, she serves as Chief Evangelist, working to invite new stakeholders to the CSforALL table – and make the table bigger. She is also the founder of the Last Mile Education Fund.

Prior to joining CSforALL, Farmer served as Senior Policy Advisor for Tech Inclusion at the White House Office of Science and Technology Policy focusing on President Obama’s call to action for Computer Science for All. She led strategy and K-12 programs at the National Center for Women & Information Technology (NCWIT), and implemented national tech and engineering programs at Girl Scouts of the USA. She has launched multiple national inclusion programs, including Aspirations in Computing, TECHNOLOchicas, the AspireIT outreach program, Lego Robotics for Girl Scouts, Intel Design & Discovery, and more.

Rozalynn Goodwin is the co-founder of Confidence. She and her 7-year-old daughter Gabby solved the age-old problem of disappearing hair barrettes by inventing GaBBY Bows–the first and patented Double-Face Double-Snap Barrette. GaBBY Bows, along with their full line of plant-based girls’ natural hair products, save families time, money, and frustration while removing stress from the styling process so moms, dads, and girls can cherish precious time together.

Confidence has filled online orders to all 50 U.S. states and 13 other countries. Their story has been featured on The Real, HSN, QVC, NPR’s How I Built This, and The Today Show and in publications including Forbes, Inc., Kiplinger magazine, Reader’s Digest, The Washington Post, Black Enterprise, MadameNoire, HelloBeautiful, and Essence.

Goodwin also serves as Vice President for Engagement for the South Carolina Hospital Association and is a Liberty Fellow in the Aspen Global Leadership Network.

The WES will offer engaging, expert panels on Wednesdays throughout Women’s History Month. Check the WES program page for updates.

The WES is presented by the USPTO’s Office of Innovation Outreach. For questions or assistance, please contact WES@USPTO.GOV.