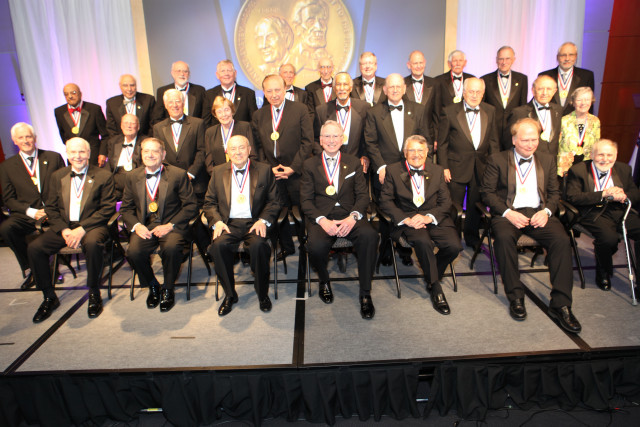 The National Inventors Hall of Fame officially inducted its 2013 class during a ceremony at the United States Patent and Trademark Office (USPTO) on May 1, 2013. This year's inductees included many brilliant problem solvers and inventors who contributed to the scientific and technological progress of our society. Several of the inductees are independent inventors who have spent their lives creating and patenting technology benefiting the world.

Acting Under Secretary of Commerce for Intellectual Property and Acting Director of the USPTO Teresa Stanek Rea said the inductees "have produced the world's most advanced communications technologies and provided some of the foundational tools of the entertainment industry-ones we now consider part of our homes, but only short decades ago were the stuff of science fiction."

Many current members of the National Inventors Hall of Fame were in the audience as Acting Director Rea conferred a medal to each inductee.

The inductees also had the opportunity to meet at the White House with Dr. John Holdren, the senior science and technology advisor to President Barack Obama, who congratulated them for their creativity, perseverance, and entrepreneurialism that exemplify the American "can-do" spirit.

Donald Bitzer, Robert Willson, and Gene Slottow (1921-1989) worked together to create plasma display technology, which is now used in many televisions.

Garrett Brown invented the Steadicam body-mountedcamera stabilizer. Brown, a Hollywood cameraman, created the technology and shot the footage for iconic cinematography in such films as Rocky and Return of the Jedi. He holds 50 patents worldwide.

John Daugman, Leonard Flom, and Aran Safir (1926-2007) patented their invention for an iris identification system in 1987, basing their work on the fact that every iris is unique. Today, iris recognition is considered the most accurate in the field of biometric identification.

Joseph Lechleider was the first person to demonstrate the feasibility of sending broadband signals over copper. His work led to DSL and ADSL technology, turning the existing copper wire phone network into a high-speed broadband delivery instrument and allowing for transmission of data at equal or different rates in each direction.

Samuel Alderson (1914-2005) was a pioneer in developing the crash-test dummy, which continues to provide automotive engineers with valuable information and enables them to design effective safety features, including seat belts and air bags.

John Birden (1918-2011) and Ken Jordan (1929-2008) developed the Radioisotope Thermoelectric Generator (RTG), a self-contained power source that obtains its power from radioactive decay. RTGs have powered most of the exploration vehicles the United States has launched into deep space.

Alfred Loomis (1887-1975) created many innovations during his lifetime, but his Long Range Navigation System (LORAN) for marine and flight navigators is probably the best known. LORAN was an essential navigational tool for decades until the introduction of the Global Positioning System in the 1990s.

Robert Moog (1934-2005) introduced the first complete voltage controlled modular synthesizer in 1964, contributing heavily to the development of electronic music. The "Moog synthesizer" opened up a new frontier of possibilities for musicians and composers. Moog is listed on 10 U.S. patents all related to electronic sound technology.

Grote Reber (1911-2002) was a pioneering radio astronomer and built the first substantial radio telescope dedicated to astronomy. Radio astronomy uses radio receivers to amplify faint cosmic signals, allowing for the detection of objects and phenomena not possible with optical astronomy. 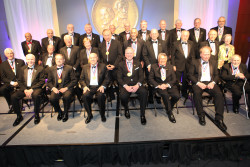 Spark of Genius
Grilling up Good Ideas
Nothing says summer like getting the grill out of the garage and cooking up a meal in the backyard,