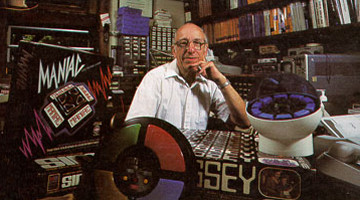 There aren't many people in the United States who have not, in some way, had a personal experience with at least one of Ralph Baer's many inventions.  The 88-year-old Manchester, New Hampshire inventor and 2010 inductee into the National Inventors Hall of Fame is credited as being the originator of video game systems (U.S. Patent No. 3728480) that now nurture a $15 billion a year industry.

Baer first conceived of a system for playing video games on a standard television set in 1966. By 1967, a working prototype involving the use of a "light gun" for shooting targets was developed.  Interestingly enough, Baer, the innovator of modern video games, says he "lost" the first video game ever played by two people. By 1972 Magnavox® had licensed Baer's technology and released what was then known as the "Odyssey" game system. One of the earliest games featured on Odyssey was a "ping-pong" or video table tennis game that consisted of a simple moving dot and two vertical bar paddles. While playing the game, modern day gamers still exclaim, "This is fun!"

What took that simple ping-pong video game to the extremely sophisticated and graphic rich games featured on systems such as Playstation®, XBOX® and Wii® today?  Baer says "in two words - semiconductor technology."  Early video game systems relied heavily on discrete transistor circuitry.  Within five years of the design of Baer's game systems, integrated circuits had increased the speed of the games and enhanced the graphics. Semi-conductors, principally in the form of microprocessors, enable today's games to be extremely fast and sophisticated.

"Back in the early days of video games, all you needed was a couple of guys doing the whole design of a game from start to finish.  The cartridges would cost about $3.00 or $4.00 to make and sell for $10.00.  Now it costs as much as $10 million to produce a single video game and there are hundreds of people each working on very specific parts of the project," Baer said.

Video game technology is only one of the many diverse inventions Baer developed.  After immigrating from Germany to the United States with his parents, just before the start of World War II, Baer came up with his first invention at age 16, while working in a New York leather factory.  The factory, Baer said, made leather cases for manicure kits.  He made a jig from wood that could hold five or six pouches at once, while running through a stitching machine.  This device enabled factory workers to greatly increase production.  Baer's favorite invention is the "Simon" game which he co-invented with friend Howard Morrison in 1977 (U.S. Patent No. 4207087).  "Simon," a game featuring red, blue, green, and yellow flashing lights wherein the player must replay a microprocessor- generated sequence of the lights from memory, went on store shelves in 1978, and is still sold today.  Other inventions of Baer's include electronic picture frames that enable sound and voice to be recorded to match the photos, talking door mats and bicycle speedometers, as well as a line of talking tools, books and toys for companies such as Hasbro®, Milton Bradley® and Kenner®.  Baer even served as a consultant for Hallmark® in the development of sound recordable greeting cards.

When asked what advice he has for a new generation of inventors, Baer said the most important thing is to document everything about your invention. "Whatever you do, sign it, date it, never ever throw anything away.  Keep every scrap of paper. It can be a real savior in court. Verbal recollections are not good enough. Memory is fungible."

Baer, who owns 50 United States patents and about 100 worldwide, also said that when filing patent applications, especially if you do-it-yourself, it is important to remember to keep the claims for the invention simple and easy to understand.  "Don't clutter up the application with nonsense," Baer said.

He also said that direct communication between the inventor and the examiner is very helpful.  Baer recalls a time when he and his patent lawyer at the time were meeting with a patent examiner in the examiner's office regarding his video game patent application.  "The examiner and the lawyer were talking jargon back and forth, and the examiner really wasn't paying much attention to me.  While they were bantering back and forth about the claims, I set up a small television set and my game console in the examiner's office, and within 15 minutes every examiner on the floor of that building was in that office wanting to play the game."  The story illustrates the saying, "a picture is worth a thousand words," in that, an actual demonstration of the invention can make legal and sometimes confusing language in a patent application come to life.

Baer said his induction into the National Inventors Hall of Fame this year "means that I am in really good company with people I have really admired like Lee Deforest (developer of electromagnetic radiation detectors fundamental in space telegraphy and the man who put the control electrode, the grid,  into the vacuum tube that started the electronic age), Edwin Armstrong (inventor of FM radio), Charles Steinmetz (distribution system for alternating current), Philo Farnsworth (television system) and Nikola Tesla (induction motors for alternating current).  These guys were my role models."

Now it is Baer's turn to be the role model for a new generation of inventors.  For more information about Ralph Baer and his many inventions, visit his website at www.ralphbaer.com.

Featured
The National Inventors Hall of Fame Inducts 16 New Members
At a ceremony held March 31 at the Department of Commerce in Washington, D.C., the 2010 class of the

Spark of Genius
Simon Says: Invent.
Ralph Baer, Gamer Extraordinaire There aren't many people in the United States who have not, in some

Advice
Special Status?
A patent application submitted to the United States Patent and Trademark Office (USPTO) can be

Network
Organizations for Independent Inventors
The United States Patent and Trademark Office does not necessarily endorse the views expressed or
Have a comment about the web page you were viewing?