Monkeying Around with Innovation

Monkeying Around with Innovation

Four years ago, the Flying Monkeys, a FIRST LEGO League team consisting of six Girl Scouts from Ames, Iowa, embarked on an expedition into the world of invention that would change their lives—and the life of one little girl in Georgia—forever.

For the girls of team Flying Monkeys—Mackenzie Grewell, Zoe Groat, Gaby Dempsey, Maria Werner-Anderson, Courtney Pohlen, and Kate Murray—it was a journey that would also take them across the country and world, bring them face to face with distinguished inventors and public figures like President Obama, and culminate in the issuance of a U.S. patent for a cost-effective prosthetic hand device that has already made a difference in the world.

The Flying Monkeys’ tour through the world of invention began when they entered the FIRST Lego League’s (FLL) 2010 Body Forward Challenge, which challenged teams in more than 56 countries to explore the field of biomedical engineering and discover innovative ways to repair injuries, overcome genetic predispositions, and maximize the body’s potential. With the help of their coaches, Melissa Murray and Claire Reifert, the Flying Monkeys set out to prove that their all-girl team, aged 11-13 years old, could deliver a game-changing invention.

After brainstorming ideas, the Flying Monkeys decided to look for solutions to help people with the congenital absence or malformation of limbs (limb differences). While conducting preliminary online research, the team came to learn about 3-year-old Danielle Fairchild from Duluth, Georgia, who was born without fingers on her right hand due to the condition symbrachydactyly. Danielle’s limb difference posed special challenges because she is right-hand dominant and wanted to be able to draw and write using her right hand.

The team focused their efforts on helping Danielle. They had the unique opportunity to learn from team member Kate’s personal experience with limb differences. Born with five-and-a-half fingers, Kate already had a special prosthesis that allowed her to hold and play a violin and bow. Using Kate’s prosthesis as a jumping off point, the team then set to work creating a new device that would allow Danielle to write and draw.

The team may not have been aware of it at the time, but they had already started the invention process in a time-honored way: understanding the current state of the art, identifying the problems in it, and then figuring out how to improve it.

“They internalized the natural process of trial and error,” said team coach Murray. “It's okay to make a mistake; figure out where it went wrong, change it and try it again.”

After countless brainstorm sessions, concepts, and meetings with prosthetics manufacturers and doctors, occupational therapists, designers, and engineers, the team arrived at a prototype device they called the “BOB-1.” Costing less than $10 to build, the device was made from moldable plastic and a pencil grip, and was designed to be strapped onto the user’s hand to hold a pen, brush, or other devices.

But would it work?

“We put so much effort into that one tiny thing, and even when we finished we weren't sure how well it really turned out,” said Kate. The answer fell to Danielle, who put on the BOB-1 and drew with her right hand for the first time.

At the FLL Global Innovation Award ceremony at the United States Patent and Trademark Office (USPTO) headquarters in spring 2011, the Flying Monkeys took top honors. As part of their prize, they received $20,000 from the X-Prize Foundation. A series of other honors followed, including an invitation to present the BOB-1 at the White House Science Fair and travel to Brazil to present at the Rio+20 United Nations Conference.

Even before winning the FLL prize, the girls had begun working with two patent attorneys, learning what exactly a patent is, and even writing the provisional application themselves.

“The girls learned, as many have, that filing a patent does not happen overnight. In fact, when the application was filed, none of them had started high school. Today, they are getting ready to enter college,” Coach Murray noted.

The moment everyone had been waiting for arrived on September 23, 2014, with the issuance of U.S. patent no 8,840,157 for a “Terminal end mounted prosthetic device.”

“This patent means a lot to me because it shows all of the hard work that we have done throughout the years as Flying Monkeys,” said Gaby. “It is good to know that something that you worked really hard at has paid off in the end.”

While earning a patent was a huge accomplishment, knowing what they had created made a measurable difference in someone else’s life stood out for the team. “Seeing it work and hearing how pleased Danielle was [with it] was definitely the best part,” added Kate.

Today, Danielle continues to use the BOB-1 to write and draw with her dominant hand. And while there are no plans to mass-produce the BOB-1, several other children with limb differences across the country have also received the device, including Danielle’s little brother—although he prefers to call it “Fred.”

Coach Murray reflected that the project “Made the girls more aware of people with differences of all kinds. They noticed them, they watched and marveled at how creative and adaptable the body can be.”

As the girls now approach the end of high school, they’ve agreed that receiving a patent will close this chapter of their lives. While none of them have quite decided on career paths, they all believe that the experience of creating and patenting the BOB-1 has left them with a lasting appreciation for science and technology. Kate, who will start applying to colleges next year, has begun leaning toward creative writing or art, but STEM will still be an important part of her life. The other girls echo this. “I wasn’t quite as interested in science or anything of that type before,” said Zoe, “but now I’m more interested in it and pursuing it.”

Gaby is also interested in a career in the medical field and hopes to attend the University of Minnesota.

Don’t let their age fool you. These “Monkeys” are wise, as Kate demonstrated with some parting advice: “Science and technology aren't quick things. It takes time and effort, and you will change along the way whether you realize it or not.”

Whatever paths the Flying Monkeys continue to choose as individuals, we are entirely certain they will be lit by the bright light of their innovative minds.

Inventors Eye congratulates the Flying Monkeys on all their success and the issuance of their U.S. patent. To learn more about young innovators, visit USPTO Kids on our website. 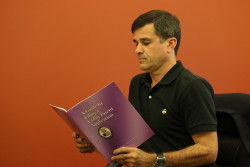 Spark of Genius
America’s Pastime Patents
Cooling weather, changing leaves, and the start of holiday preparations – for many, these signs of

Spark of Genius
Monkeying Around with Innovation
Four years ago, the Flying Monkeys, a FIRST LEGO League team consisting of six Girl Scouts from Ames

Advice
Using EFS-Web: 5 Electronic Filing Pitfalls and How to Avoid Them
To compete in today’s innovation-driven economy, inventors and entrepreneurs need to get an

Events
November
Upcoming events and news in the world of innovation Saturday Seminar in Detroit Nov. 15 The next

Network
Organizations
Organizations and resources for the independent inventor community Inventors Eye maintains a list of
Have a comment about the web page you were viewing?