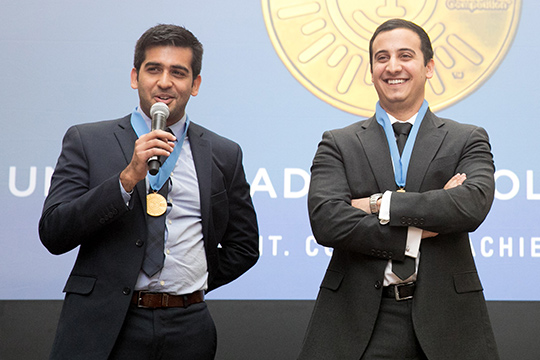 Every new generation faces increasingly complex problems. And while there’s always a grump or two that laments the future, we needn’t look far in America to see just how capable and technologically adept our young people are. At every university across the country, students are engaging in groundbreaking research and development that addresses tomorrow’s—and today’s—problems. Once a year at the United States Patent and Trademark Office (USPTO), they get to put those achievements on display.

The 2016 Collegiate Inventors Competition was held at the USPTO November 4, 2016. Sponsored by the National Inventors Hall of Fame, the event has become one of the premiere competitions for college students to showcase the innovative projects and research they engage in. The 2016 event featured some of the most impressive entries yet from perennial powerhouses such as Columbia and Johns Hopkins as well as newcomers like the University of Massachusetts at Lowell and Cooper Union.

The competition is divided into both graduate and undergraduate divisions. In the graduate division, Carl Schoelhammer from MIT took home the top prize for his invention of the SuonoCalm, a device that uses low-frequency ultrasound to rapidly expedite the absorption of medications directly into tissue in just one minute. Schoelhammer’s advisor is the noted professor and engineer, Dr. Robert S. Langer.

In the undergraduate division, the gold medal went to Payam Pourtaheri and Ameer Shakeel from the University of Virginia (UVA) for their invention, AgroSpheres, an exciting new class of engineered biological particles that help degrade residual pesticides on the surface of plants.

Inventors Eye was lucky enough to sit down with Payam and Ameer prior to their winning for a brief conversation about their invention.

“We wanted to do something that had an actual social impact,” said Ameer. “We looked around and found great work that informed us about the toxicity of pesticides and the magnitude of the repercussions they have on developing countries that don’t have safeguards to protect against exposure.”

Essentially, AgroSpheres are biological particles that have been trained to eat specific chemical compounds.

“So AgroSpheres is Pacman, and the pesticides are the ghosts,” said Payam with a surprising knowledge of a video game preceding his birthdate. “What we have done is put enzymes on these biological particles that helps Pacman find the ghosts. He’ll then break up the ghosts and turn them into safe waste products.”

“The enzymes we express are very specific to the chemical makeup of pesticides,” added Ameer. “They look for the pesticide itself. It is a toxic compound, and [AgroSphere] speeds up its degradation.”

The enzymes are naturally occurring, coming from bacteria, fungi and other microorganisms. AgroSpheres harness the organisms’ own evolutionary processes that have allowed them to overcome poisons and adjust to man-made chemicals and use them as energy sources.

Just how effective is this “Pacman” at eating pesticides?

“We tested it with a commonly used pesticide that the California Department of Pesticides says takes 7 days to degrade on its own. We tested the runoff with our product; it degraded completely in just two hours.”

Payam and Ameer are quick to point out that their invention is not intended to encourage more pesticide use but to be one more tool and method at the disposal of farmers who want to practice safe, productive, and sustainable agriculture.

Both Payam and Ameer were born outside the United States—Payam in Iran and Ameer in Pakistan—and cite being immigrants as an important motivation for their work.

“Thankfully my parents restarted their lives here in the United States,” said Payam. “We wanted to use the abilities and opportunities we have been blessed with to make an immediate social impact.”

Ameer agrees: “Being aware of the limited resources in the countries we grew up in, once we came here we just wanted to make the most of the opportunities presented to us. Environmental engineering is what we found and worked hard at, and we’re really thankful to be here.”

In addition to their family, Payam and Ameer also cite the support of their mentors and the University of Virginia as encouraging their research and making their success possible.

“We are very blessed to have been supported by incredible mentors, incredible faculty who believe in us. Even when we run into obstacles, they're there to pick us up,” said Payam. AgroSpheres has benefited from several incubator programs at UVA that connect students with local and regional companies.

Both Payam and Ameer had planned on attending medical school once they graduated, but having now followed AgroSpheres to the brink of commercialization, they are focusing on a new goal beyond college: starting a company and bringing their technology to the world. The team now consists of several other UVA students and graduates, as well as their faculty advisor, Dr. Mark Kester.

“Maybe one day. Yeah. A couple years down the road,” said Payam with a smile when asked if he still planned to attend medical school. The twinkle in his eyes, however, betrayed something many inventors already know: once you go down that road of finding solutions to big problems, it’s hard to stop.

Inventors Eye congratulates Payam and Ameer and all of the 2016 CIC Finalists. Stay tuned for future stories featuring CIC alumni. As many of the finalists and winners continue with the dreams of entrepreneurship and innovation, we will follow up with them and tell their stories. Humanity’s hope for a safer and kinder world already feels safe in their hands. 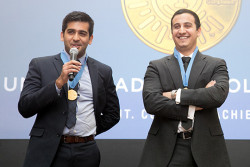 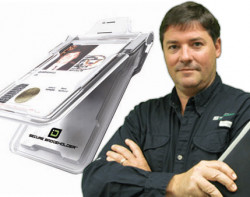 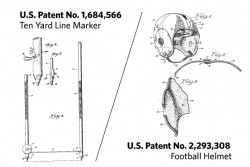 Patents Pick 5
Playing Off Patents
The first snows have fallen, a whiff of hot wings and barbecue mix in the frigid air, and you’ve 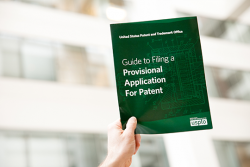