Many Inventors Eye “Spark of Genius” stories feature individuals who only began to think of themselves as inventors after stumbling across a solution to a problem. For one 15-year-old patent holder, the opposite proved to be true.

In 2011, Alexis Lewis read a news article documenting the extreme famine conditions in Somalia that year. One of the most heart-wrenching effects of the famine was parents having to leave their children along roads because they could not carry them on the long journeys to refugee centers.

“When I saw this, I thought, ‘That is really awful that people are having to make decisions like that,’” said Alexis.

Where others might have remorsefully moved on, Alexis knew she could do something. After all, she already knew she was an inventor, and problems like this are an inventor’s motivation. After further research, she discovered an underlying issue.

“There is a tremendous dearth of wheel transportation in Africa,” Alexis explained, “so bad that people are forced to carry the sick, weak, elderly, or those in delivery distress from small villages to larger villages with doctors using makeshift stretchers or, if available, in a wheelbarrow.”

Alexis aimed to develop a device that could make manual transportation more efficient and easier to use for long periods of time. Most importantly, it had to be realistically obtainable in impoverished rural regions. She ultimately found the inspiration for her solution in a much older innovation: the travois used by Native Americans of the Great Plains, which employed two long teepee poles crossed at a vertex and holding cargo or passengers at the opposite end. The ends of the poles were dragged along the ground by horses, dogs, or sometimes humans.

“I took that old, antiquated design and modernized it.”

The new travois added inexpensive solid wheels and a belt to attach the puller’s waist for more efficiency over long durations. But perhaps the most innovative feature of her design is the material from which it can be made and proliferated.

“The current version is made out of bamboo due to the fact that it is abundant in Africa,” explained Alexis.

On March 17, 2015, the United States Patent and Trademark Office (USPTO) issued U.S. patent no. 8,979,095 to Alexis, a rewarding and satisfying moment for the young inventor.

“[Getting a patent] was validation of my idea. It said that—at least from a theoretical standpoint—it certainly seems to work.”

Alexis’ intention is to deploy the travois as a kit, assembled by combining the manufactured parts with locally collected bamboo. Once the idea starts to take hold, the parts can be switched out, allowing for a basic framework and design that could be made from a variety of parts of similar function. For example: lowering costs by using salvaged bike tires instead of the kit’s non-pneumatic wheels.

“The idea is that people will be able to make their own modifications, hopefully leading to the seeding of an idea in Africa, as opposed to the sale of a product.”

Quite visionary for a 15-year-old, but Alexis began her journey on the path to invention much earlier. She credits her grandfather, retired Grumman Aerospace rocket scientist Dr. Edward Stokes Fishburne who worked on the Apollo missions, with instilling in her an appreciation of science and curiosity for the world.

At the age of seven, Alexis accompanied her grandparents on a road trip to the western United States. Along the way, her grandfather enthusiastically explained the physical properties and causes of many of the iconic geographical features they encountered: Yellowstone Park’s Old Faithful Geyser, the Grand Canyon, and the majestic giant rock formations of the West.

“I’ve been looking at the world differently ever since,” confessed Alexis. “A lot of science isn't necessarily the lab work. It isn't necessarily the textbooks or the formulas. It's just looking at the world around you, breaking it down into little pieces and finding out how each piece interacts with the other, to form a functional, giant system.”

Today, Alexis is passionate about spreading that enthusiasm to others. She has even started a campaign called “Inventing 101,” a movement to have classes on invention offered as electives at middle schools across the country.

“Inventing isn’t something just for the Edisons and Teslas; it’s something that everybody can do. There is so much untapped potential in this country because people don’t think of themselves as inventors. If they did, we would see a lot more people out there with their inventions making the world a better place.”

In addition to the travois, Alexis has a pending patent application on an invention to help firefighters deliver breathing masks to occupants trapped in smoke-filled buildings. While her initial inventions tended to be “low tech,” Alexis said she has begun to focus on higher-tech innovations, delving into the world of ion engines and rail guns.

When she isn’t busy thinking about new technologies and life-saving devices, Alexis speaks frequently on the subject of invention to audiences. She is adamant that anybody can be an inventor.

More recently, Alexis traveled to Washington, D.C., to participate in the Smithsonian-USPTO Innovation Family Festival on May 2, 2015, at the Smithsonian American Art Museum. While explaining the travois to attendees, she shared her passion for problem solving and innovation with crowds consisting mostly of younger children whom, it is hoped, were inspired and instilled with the same sense of curiosity that has already served Alexis well. And for those youngsters who may even one day decide to follow in her footsteps, Alexis has a simple piece of advice:

“First, just try picking up and looking at a problem from a slightly different perspective.”

You can read more about Alexis Lewis on her website at www.alexislewisinventor.me. There, you will find more information about her Inventing 101 campaign and be able to watch her presentation at a TEDx event at the University of North Carolina. Alexis was previously known as “Chase.” Since January 2015, she has identified as a female. 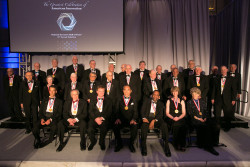 Featured
National Inventors Hall of Fame Inducts Next Class of Innovators
Each year, America celebrates its inventors who have contributed immeasurably to the progress of

Patents Pick 5
In the Garden
Spring and summer means sun, flowers, and of course working around the yard and in the garden. But

Advice
New Option for U.S. Design Applicants
Thanks to the recent U.S. implementation of the Geneva Act of the Hague Agreement Concerning the

Network
Organizations
Organizations and resources for the independent inventor community Inventors Eye maintains a list of
Have a comment about the web page you were viewing?