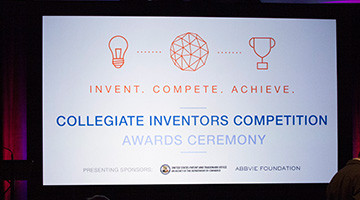 What does the future of medical technology look like? Imagine smarter devices able to find the optimal electrical path through a patient's body and zap the heart back into a steady rhythm. Imagine cheaper tests for detecting certain types of cancer more accurately and earlier than current methods. Imagine treatments that enhance the body's natural ability to fight cancer. These are just some of the exciting new technologies that might make it into our daily lives in the years to come. But what's more impressive than the technologies themselves?

The fact that they were all created by college students.

Attendees at the 2013 Collegiate Inventors Competition (CIC) awards ceremony on November 12, held at the United States Patent and Trademark Office (USPTO) headquarters in Alexandria, Va., had a chance to see the exciting technological frontier up close and hear from some of these brilliant future leaders. The competition is open to all technologies, but the majority of finalists this year came from the medical technology fields-a reflection of the rapid expansion of biomedical engineering in the academic and research worlds as well as private industry.

The competition consists of graduate and undergraduate categories, with teams and individuals representing schools such as Harvard, the Massachusetts Institute of Technology, University of Pennsylvania, North Carolina State, Stanford, and Johns Hopkins University among others.

The 2013 CIC awards ceremony brought together well-known figures in technology and intellectual property-including many members of the National Inventors Hall of Fame--to encourage and cheer the competitors. Josh Clark and Chuck Bryant from the Discovery Channel's "Stuff You Should Know" served as hosts, entertaining the crowd with their trademark wit and expertly pacing the high-energy event.

Steve Sasson, the inventor of the digital camera, delivered well-wishes before the competition got under way. "[These competitors] have invention in their bones," he said.

Sasson and outgoing Deputy Director of the USPTO Teresa Stanek Rea did the honors of unsealing the judge's envelopes and announcing winners.

In the undergraduate division, a team of eight biomedical engineering students from Johns Hopkins University took the top prize for their invention of the PrestoPatch, a device that improves the way heart shock is delivered to patients experiencing arrhythmia. The PrestoPatch uses three conductive patches-as opposed to the current norm of two-providing doctors more options for producing an electrical current through a patient's body and shocking the heart back into a normal heartbeat and increasing the likelihood of successful use. The device also reduces impedance in the body prior to delivering the shock. With current shock treatment, doctors overcome impedance by pressing down on the shock pads with their fists. The PrestoPatch uses a tool to apply an exact amount of pressure.

Asked by Sasson what their future plans were, the undergraduate winners said they hope to quickly commercialize the device and ensure its availability to health practitioners far and wide.

In the graduate division, Stanford University's Aaron Ring and Kipp Weiskopf won first place for their engineered "high-affinity SIRPα variants." These greatly improve the body's natural ability to fight cancer by stimulating immune cells known as macrophages to locate and "eat" cancer cells. The SIRPα variants are not toxic to normal cells in the body, making them an exciting development in the field of cancer treatment.

Answering Sasson's question about the future, Ring quipped, "Well, we have to finish school first," drawing laughter from the crowd. His response, however, was a humbling reminder of the remarkable achievement he and Weiskopf have reached so early in their lives.

Following the awards announcements, Steve Katsaros, CEO of Nokero and himself the winner of the 1995 CIC, addressed the finalists and winners. "Think about the lives around you that you improve," Katsaros said. "You will make the world a better place."

Nokero, founded by Katsaros in 2010, manufactures solar lights and products affordable in the developing world, which reduces the need for potentially deadly kerosene lighting. Nokero was a winner of the USPTO's pilot program Patents for Humanity, which celebrated patented technology used to improve the lives of those in need. Katsaros provided each student with one of his solar-powered light bulbs as a symbol of the positive influence they will have on the world.

Sponsored by Invent Now, the National Inventors Hall of Fame, the USPTO, and a list of corporate donors, the Collegiate Inventors Competition has recognized the most innovative and inspiring inventions produced by college students since 1991. Judging panels are composed of recognized experts in the fields of science and technology, drawn from academic, private, and government organizations.

For a full list of finalists and winners, visit the CIC website. You can also watch video clips from the event and see the finalists present their inventions at the CIC YouTube channel.

Featured
Collegiate Inventors Lead Technological Charge
What does the future of medical technology look like? Imagine smarter devices able to find the

Spark of Genius
Tripping the Light Fantastic: An Interview with W. Richard Frederick
Any of us who has hung holiday lights has dealt with a string that goes dark because of one burned