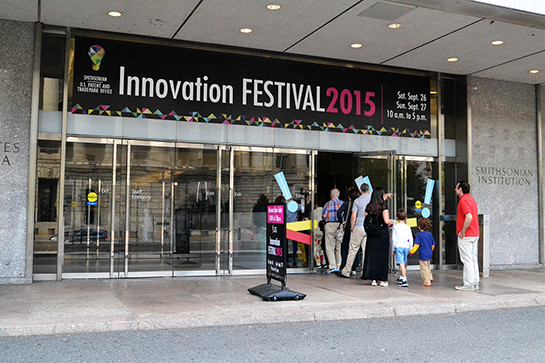 Over 30,000 visitors to the Smithsonian’s National Museum of American History in Washington, D.C., got a chance to experience innovation from multiple perspectives during the 2015 Innovation Festival.

Perhaps the first thing visitors noticed about the Innovation Festival was the engaging and welcoming environment. Part of an ongoing collaboration between the United States Patent and Trademark Office (USPTO) and the Smithsonian, the Innovation Festival, held September 26-27, was set within the new Innovation Wing of the American History Museum. From the ultra high–tech (turbine engine technology) to the ultra-tasty (flavor innovations in candy), an eclectic range of technologies and industries were represented. Along with industry giants, exhibitors also included multiple independent inventors, small businesses, and university- and government-affiliated inventors.

One table drawing a constant crowd was manned by former NASA astronaut Dr. Scott Parazynski. The only person to both reach the summit of Mt. Everest and orbit the Earth, Parazynski invented a fluid storage pack that  keeps water from freezing in the harshest locations on the planet (or off of it). Parazynzki, whose accomplishments stretch for pages and include being a physician, university professor, and licensed commercial airline pilot, said he is driven by a need to push the boundaries of his abilities and come up with creative solutions to problems.

Another exhibit featured the Human Engineering Research Lab from the University of Pittsburgh, led by Rory Cooper, Ph.D. The lab focuses on researching and creating improved assistive technology for people with disabilities. The patented technology on display included a wheelchair suspension device and a robotic lifting arm that enables wheelchair users to lift themselves out of a chair without assistance. Cooper, whose work is divided between both robotics and mechanical engineering, said that he does not have a preference for either field.

“I just go where the problem-solving takes me,” he told Inventors Eye.

Exhibits from iconic American companies were also crowd favorites at the Innovation Festival. Ford Inc. showed off a new patented technology that assists drivers in backing up with a trailer. On the other side of the exhibit space, candy maker Mars Inc. laid out a cache of sweet treats and explained the process and technology behind their creations. One of them attempts to solve an age-old cacao conundrum:

“White chocolate is one of those things that people either love or hate,” explained inventor John Munafo.

By extracting a compound from the cacao bean and adding it to white chocolate, Munafo and his co-inventor, Mark Mackey, were able to create a taste and texture that appealed to a wider range of chocoholics. Of course, it’s hard to make such a claim without backing it up, so attendees were given the opportunity to test the patented new chocolate side by side with an unenhanced control. Predictably, they had no issue finding test subjects.

For younger attendees, another exhibit easily caught their eye. Innoskate, an endeavor by the Smithsonian’s Lemelson Center for the Study of Invention and Innovation, featured a display showing the evolution of skateboarding technology. Standing behind the table was Paul Schmitt, also known as “Professor Schmitt” in the skateboard community for his expertise on skateboard design. Schmitt is the inventor behind much of skateboarding’ s technological evolution, from improved shapes to the construction of more durable and lighter boards. Innoskate perfectly captured the festival’s ambitious goal of showing how a broad spectrum of technologies can be linked by the process of innovation.

While attendees roamed the exhibition, inventors delivered presentations and informal question and answer sessions every 30 minutes from a central stage area. These presentations included demonstrations of technology, discussions from the inventors about how they came up with the ideas, and even group activities led by presenters.

“The whole setup of the event was awesome,” said one attendee from the Washington, D.C., area. “I feel like it really made the invention process accessible and shows that everyone has the ability to become an inventor.”

For a full list of exhibitors and presentations, see the Innovation Festival page. 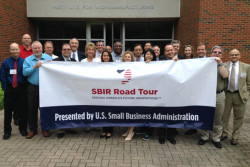 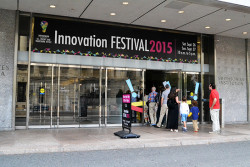 Featured
Celebrating Innovation
Over 30,000 visitors to the Smithsonian’s National Museum of American History in Washington, D.C 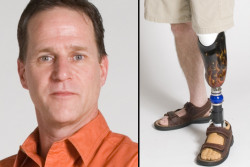 Spark of Genius
Walk Tall and Innovate
Innovation changes lives every day. It makes many of our daily tasks easier, more efficient, or more 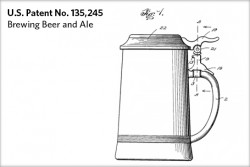 Patents Pick 5
Innovation Brewing
When the cold weather sets in, many responsible adults like to retire by a warm fire with a hearty 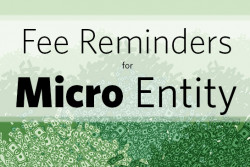 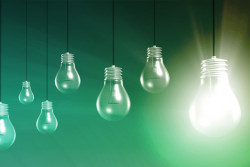