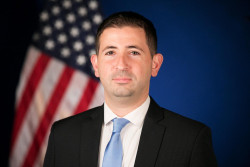 IP Attaché for the Middle East and North Africa

Peter Mehravari serves as the U.S. intellectual property (IP) attaché for the Middle East and North Africa (MENA) region. Based in Kuwait, Mr. Mehravari works as the principal officer within U.S. embassies and consulates throughout the region on matters related to the protection and enforcement of IP rights. His duties include assisting U.S. companies doing business in the region; advocating for effective IP policies; advising ambassadors, embassy staff, and other U.S. government officials on foreign governments’ IP practices; educating foreign government officials, students, entrepreneurs, and business representatives on IP matters; and conducting public awareness programs.

Mr. Mehravari was previously a patent attorney in the USPTO’s Office of Policy and International Affairs (OPIA), where he advised the Under Secretary of Commerce for Intellectual Property and Director of the U.S. Patent and Trademark Office on domestic and international IP issues, including treaty obligations. As a member of the office’s Patent Team, he helped formulate U.S. domestic and international policy regarding protection and enforcement of IP, consulted with foreign governments and U. S. government agencies on IP laws and legal regimes, and led technical assistance and capacity-building programs and conferences with foreign governments seeking to develop or improve their IP laws and regulations. Some of Mr. Mehravari’s work included advising foreign governments on IP office best practices, developing IP policy for emerging technologies, advising on U.S. IP legislative reforms, enhancing patent quality and decreasing patent backlogs in foreign IP offices, and assisting efforts to establish and lead the ID5 (the Industrial Design Forum).

Prior to joining OPIA, Mr. Mehravari was a USPTO patent examiner in the field of advanced communication systems. Before entering government service, Mr. Mehravari had several years of experience as a patent practitioner in the Atlanta, Georgia, region, where he assisted a range of clients on domestic and international patent and trademark prosecution matters, with a focus on the needs of independent inventors and entrepreneurs. Mr. Mehravari also served as a part-time lecturer at The George Washington University School of Engineering and Applied Science, where he taught patent and industrial design law to engineering students. For three years, he also led the Patent and Trademark Office Society’s ReSET group, delivering engineering, scientific, computer programing, and IP concepts to Washington D.C. elementary school students through creative and interactive experiments.

Mr. Mehravari holds a B.S. in electrical engineering from the Georgia Institute of Technology and a J.D. from Atlanta’s John Marshall Law School.