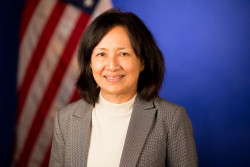 Prior to arriving in Bangkok, Kitisri was an attorney-advisor in the USPTO’s Office of Policy and International Affairs, where she played a role in formulating and implementing IP policy and advised other U.S. government agencies on both domestic and international IP issues. Her focus was in the areas of patents, plant variety protection, and technology transfer. Kitisri was part of the USPTO patent expert team advising the Office of the United States Trade Representative during several free trade agreement negotiations, including the Trans-Pacific Partnership Agreement and the Transatlantic Trade and Investment Partnership. She received a Department of Commerce Gold Medal for Leadership in 2016.

For 10 years, Kitisri was the United States Representative to the Council of the International Union for the Protection of New Varieties of Plants (UPOV), which is headquartered in Geneva, Switzerland. From 2012 to 2015, she served as president of the UPOV Council, and in 2015 received a gold medal from the organization in recognition of her service.

Prior to joining the USPTO, Kitisri practiced patent law in the private sector. Before receiving her law degree, she was a research scientist at a Fortune 500 company. Her areas of research included biotechnology, and she was named co-inventor in five U.S. patents and several foreign patents.

Kitisri received an M.S. and Ph.D. in plant breeding from Iowa State University, and a J.D. from Indiana University’s Robert H. McKinney School of Law.