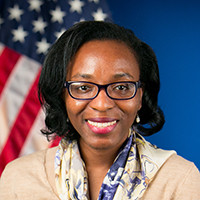 IP Attaché for the U.S. Mission to the World Trade Organization in Geneva

Deborah Lashley-Johnson is the USPTO’s IP Attaché for the World Trade Organization (WTO) at the U.S. Permanent Mission to the United Nations and Other International Organizations in Geneva, Switzerland. She works on issues involving the WTO Agreement on Trade-Related Aspects of Intellectual Property Rights (TRIPS) and certain substantive committees of the World Intellectual Property Organization (WIPO). While on detail in Geneva, she is also the Africa IP lead for the Office of the U.S. Trade Representative (USTR).

Prior to being posted in Geneva, Ms. Lashley-Johnson was an attorney/advisor at the USPTO’s Office of Policy and International Affairs from 2010–2015, where she was responsible for a wide range of issues at WIPO concerning governance, budget, and legal standards that promoted IP protection. She was also the lead of the USPTO’s Africa IP team, providing capacity building for the African continent. She also worked on policy formation concerning geographical indications and biotechnology under the WTO’s TRIPS Agreement.

From 2008–2010, Ms. Lashley-Johnson was the diplomatic IP attaché at the U.S. Mission in Geneva. She was the first legal IP expert for the U.N. side of the mission, analyzing and commenting on IP policy issues concerning counterfeit medicines at WIPO, the U.N. Conference on Trade and Development (UNCTAD), and the World Health Organization (WHO).

From 1997–2008, Ms. Lashley-Johnson worked on IP and trade issues for the U.S. government in a variety of capacities—at the USPTO and at the International Trade Administration - handling IP issues at a number of international bodies, including WTO, WIPO, UNCTAD, the Organization for Economic Cooperation and Development, and WHO.

Ms Lashley-Johnson earned a B.A. in International Relations from Georgetown University, and a J.D. from American University’s Washington College of Law.