Nominate an inventor for the National Medal of Technology and Innovation

Blog by Drew Hirshfeld, Performing the Functions and Duties of the Under Secretary of Commerce for Intellectual Property and Director of the USPTO 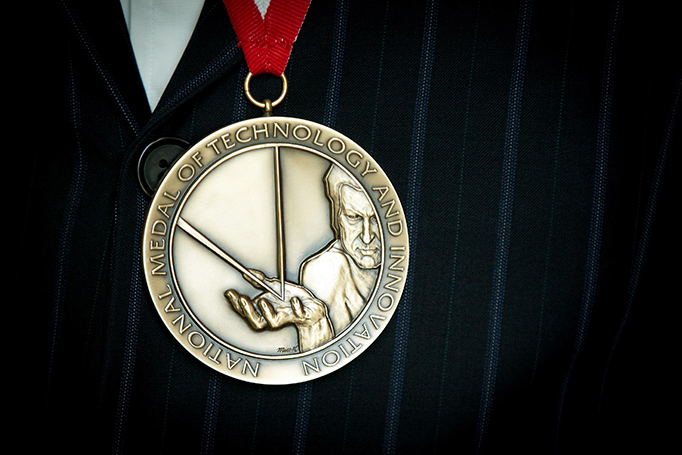 The design for the National Medal of Technology and Innovation is the work of medalist and sculptor Mico Kaufman of North Tewksbury, Massachusetts. (Photo by Jay Premack/USPTO)

We live in a world shaped by innovation. From lasers, to smartphones, wireless networks, 3D printing, prosthetics, vaccines, and so much more—our lives are improved, and in some cases saved, by the efforts of scientists and inventors from across our great nation. These intrepid innovators inspire us all. They challenge us to dream and to dare, to explore the far corners of our solar system or the genetic code of human beings, to pursue a degree or a career we may not have previously considered. They remind us that everyone has within them the potential to change this world for the better. They are role models and leaders in the march of human progress, worthy of commendation for their ingenuity and global impact.

To recognize these often unsung heroes, the USPTO is currently accepting nominations for the National Medal of Technology and Innovation (NMTI), our nation’s highest honor for technological achievement.

The President of the United States awards the NMTI to individuals, teams, and companies that have made lasting contributions to America’s competitiveness, standard of living, and quality of life through technological innovation. Since the Medal’s inception in 1980, only 220 people have received this prestigious recognition. Past recipients of the NMTI, or Laureates, have included:

• Steve Jobs and Steve Wozniak, for their development of the personal computer
• Yvonne Brill, for inventing a rocket propulsion system to keep communications satellites in orbit
• James West, for co-inventing the foil electret microphone, which is used in phones, computers, and hearing aids
• Edith Flanigen, for her innovations in molecular sieves, which are used to purify petroleum, water, and countless other compounds

You can learn more about these and other NMTI Laureates on the National Science & Technology Medals Foundation’s website.

We invite nominations for the NMTI that represent the diversity and ingenuity of innovators from across the United States. If you know of a person, team, or company that has changed the technological landscape through their discoveries and achievements, you can nominate them on the NMTI page of the USPTO website through May 20.

The NMTI is a powerful symbol and incentive that encourages future generations to pursue technical careers, improve our world, and keep the United States at the forefront of global innovation. For more information on the NMTI and the award process, attend our webinar on March 9, sign up for the USPTO Awards newsletter, or contact us at nmti@uspto.gov.