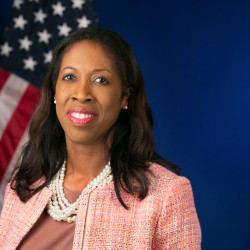 This is an archived page. Christal Sheppard left the USPTO in October 2017. To view a current list of USPTO executives and their biographies, visit the Executive Leadership page.

Dr. Christal Sheppard joined the USPTO in 2015 as Director of the Midwest Regional USPTO in Detroit.  Prior to joining the USPTO she was an assistant professor of law at the University of Nebraska, where she co-founded a program of Concentrated Study in Intellectual Property law at the Law College.  Dr. Sheppard has a M.S. and Ph.D. in Cellular and Molecular Biology from the University of Michigan and a J.D. from Cornell University Law School. She has over two decades of Science and Intellectual Property Law and Policy experience including as a practicing attorney at Foley & Lardner and the United States International Trade Commission and internships with Judge Rader at the United States Court of Appeals for the Federal Circuit and the Executive Office of the President's Office of Science and Technology Policy. In 2005, Dr. Sheppard completed Harvard University’s John F. Kennedy School of Government’s Executive Education for Senior Managers in Government program, and in 2014, she completed George Mason University’s Law and Economics Institute program.

Her successful career in intellectual property law and policy includes her tenure as Chief Counsel on Patents and Trademarks for the United States House of Representatives Committee on the Judiciary where she was integral in many endeavors including the Leahy-Smith America Invents Act, the most comprehensive change to this nation's intellectual property laws in over 60 years.