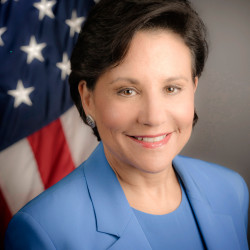 Secretary Pritzker is a key member of President Obama’s economic team, with 27 years of private sector experience. Since taking office, she has worked closely with the business community and helped advance the President’s priorities of expanding growth and opportunity for all Americans. Guided by conversations with more than 1,500 CEOs and business leaders, and over one-third of the Fortune 500 CEOs, Secretary Pritzker has developed the “Open for Business Agenda.” This bold strategic plan and policy blueprint  for the Commerce Department focuses on expanding trade and investment, unleashing government data for economic benefit, spurring innovation, protecting the environment—and executing these priorities with operational excellence as careful stewards of taxpayer dollars.

As the country’s chief commercial advocate, Secretary Pritzker leads the Administration’s trade and investment promotion efforts. Since taking office, she has traveled to 29 countries and 41 U.S. cities, and led four trade missions, including the first to the Middle East by a Commerce Secretary in 15 years and a commercial diplomacy mission to Ukraine, Poland, and Turkey at the request of President Obama.  In June 2014, she became the first-ever Commerce Secretary to travel to Burma, as part of her central role in the Administration’s strategic rebalance to the Asia-Pacific region. Her multiple trips to the region have strengthened and deepened our commercial relationships on the continent. A prominent advocate for America’s economic growth, Secretary Pritzker has initiated the United States High Level Economic Dialogue with Mexico, expanded our Foreign Commercial Service presence around the world, and worked with the American business community on urgent issues, such as the crisis in the Ukraine. Read more.