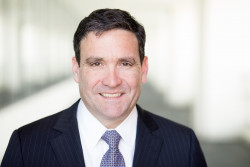 Vice Chief Administrative Patent Judge William “Tim” Fink is on detail to the Office of the Under Secretary as Senior Legal Advisor to the Under Secretary of Commerce for Intellectual Property and Director of the USPTO. As Senior Legal Advisor, he advises the USPTO Director on a wide-range of Patent-related issues, including PTAB precedential decisions, policies governing America Invents Act (AIA) proceedings, PTAB and patent-related rulemaking, and patent subject matter eligibility.

Prior to joining the USPTO, Judge Fink was a partner at Kirkland & Ellis, LLP in Washington D.C., where he litigated patent cases in district courts and the International Trade Commission. Among other matters, Judge Fink represented major technology companies in successful trials at the ITC, where he was primarily responsible for managing merits claims and defenses, expert testimony and reports, key fact witnesses, and advising clients at trial. Prior to becoming a partner, he was an associate at Kirkland & Ellis and Simpson Thacher & Bartlett, LLP, in New York.

Judge Fink is a graduate of Georgetown University Law Center, University of Pennsylvania, and Drexel University.