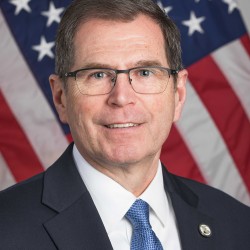 Donald Hajec currently serves as the Patents Chief Business Officer at the United States Patent and Trademark Office (USPTO). Don began his career at the USPTO in 1982 as a patent examiner after graduating from Virginia Tech with a degree in Industrial Engineering and Operations Research. He was promoted to supervisory patent examiner in Technology Center 2800, where he also served as a quality assurance specialist. In 2002, Don was appointed to the Senior Executive Service as a Technology Center Director and served in Technology Centers 3600 and 3700. From 2015-2020 he was an Assistant Deputy Commissioner for Patents Operation.

Don is the recipient of numerous awards, including receiving the Department of Commerce Gold (CPC Implementation) and Silver (Patent Assistance Center) Medals and twice received Bronze Medals. In 2002 he earned a Certificate in Advanced Public Management from Syracuse University’s Maxwell School of Citizenship and Public Affairs.