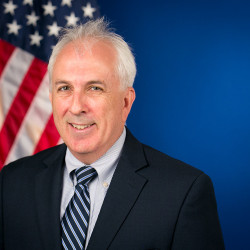 Deputy Commissioner Seidel began his career at the USPTO as a patent examiner, became a Supervisory Patent Examiner, and was promoted to the Senior Executive Service (SES) in 2001 as a Director in Technology Center (TC) 2800.  Subsequently, he served as an Assistant Deputy Commissioner for Patent Operations, with operational oversight over several TCs including TC 2600, TC 3600, and TC 3700.  More recently, as the Deputy Commissioner for Patent Administration, he provided executive leadership in coordinating the Patents budget and information technology efforts, ensuring resources were allocated in concert with organizational priorities.

In his new role, Mr. Seidel will provide executive oversight and coordinate the activities of the examination of applications and patent-examining functions in Technology Centers 1700 and 2800.  Additionally, he will serve as the focal point for Patents information technology initiatives and application processing.

Mr. Seidel received his undergraduate degree in metallurgy from the Pennsylvania State University, and a Certificate in Advanced Public Management from the Maxwell School of Citizenship and Public Affairs at Syracuse University.