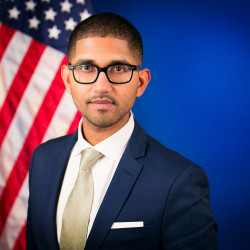 This is an archived page. Vikrum Aiyer was the Chief of Staff until January 2017. View a current list of USPTO executives and their biographies on the Executive Leadership page.

Vikrum D. Aiyer is Chief of Staff of the U.S. Patent and Trademark Office in the U.S. Department of Commerce. Arriving from the White House, Aiyer previously served as President Obama’s senior policy advisor for the innovation and manufacturing agenda at the National Economic Council.

As the principal political and policy advisor to the under secretary of commerce for intellectual property, the chief of staff helps coordinate a $3.4B budget, in support of the bureau’s 13,000 employees, to execute the daily operations, policies priorities, and global communications of the president’s intellectual property agenda. Managing the policy development process with the White House, the Department of Commerce, the Copyright Office, and the U.S. Trade Representative—the chief of staff executes the secretary and under secretary’s mission of optimizing the quality of patent and trademark rights, improving the enforcement of intellectual property worldwide, and placing more tools in the hands of entrepreneurs to unleash new technologies and industries.

Aiyer was previously deputy chief of staff, where he managed public-private partnerships aimed at expanding the national footprint of the patent & trademark office; boosting export capabilities for small businesses; spurring advanced manufacturing opportunities in America; and ripening the business climate for startup growth.

As a former communications advisor to Sen. Ed Markey (D-MA) and District of Columbia Mayor Adrian Fenty (D), Aiyer has worked on strategic communications campaigns for Congress, federal agencies, and trade associations, including the State Department, the White House Initiative on Asian Americans & Pacific Islanders and the National Education Association.

In 2015 Forbes Magazine named Aiyer to the 30 Under 30 list for Law & Policy. He attended the University of California, Berkeley and did graduate work at the George Washington University’s School of Political Management. He lives in the District of Columbia, where he volunteers on the steering committees for Refugees International, Big Brothers Big Sisters, and the Susan G. Komen Foundation.