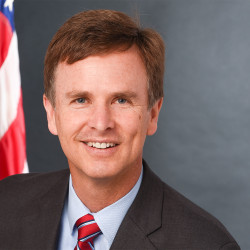 This is an archived page. Timothy Clark was the Chief Communications Officer of the United States Patent and Trademark Office until January 2021. View a current list of USPTO executives and their biographies on the Executive committee webpage.

Tim Clark is the Chief Communications Officer of the U.S. Patent and Trademark Office (USPTO). He is responsible for the development and implementation of strategic communications for the USPTO in coordination with the U.S. Department of Commerce and the White House, and he supports and advises the Under Secretary of Commerce for Intellectual Property and Director of the USPTO.

As Chief Communications Officer, Mr. Clark directs a team of communications, education, and outreach professionals focused on promoting the agency's goals and objectives. He also oversees the USPTO's partnership with the National Inventors Hall of Fame and management of the National Medal of Technology and Innovation, which is issued annually by the White House.

Prior to joining the USPTO, Mr. Clark served President Donald J. Trump as a Senior Executive and Policy Advisor in the White House Executive Office of the President and as White House Liaison to the U.S. Department of Health and Human Services (HHS).

A 25-year veteran of public affairs and strategic communications, Tim Clark has been a partner at two major West Coast communications and campaign firms and is an expert at messaging, crisis management, coalition building, grassroots advocacy, and policy development. His work has been recognized for excellence by the American Association of Political Consultants.