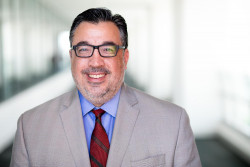 Peter Krug is the Senior Legislative Advisor of the United States Patent and Trademark Office (USPTO). He is responsible for the development and implementation of a macro legislative strategy for the USPTO in coordination with the U.S. Department of Commerce and he supports and advises the Under Secretary of Commerce for Intellectual Property and Director of the USPTO.

Mr. Krug has spent nearly 25 years in the Washington, D.C., policy arena. Mr. Krug began his Washington career in the 1990s serving as a Senior Legislative Aide for two members of Congress, handling a portfolio including telecommunications, foreign affairs, defense, financial services, and judicial issues. Mr. Krug then began a 17-year lobbying career focused on telecommunications, representing companies from the broadcast industry to the satellite world to traditional telephony firms, including AT&T and Verizon Wireless.