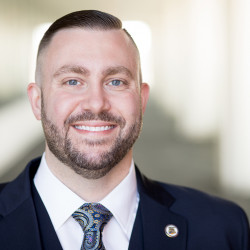 Peter-Anthony Pappas is the Special Advisor to the Under Secretary of Commerce for Intellectual Property and Director of the United States Patent and Trademark Office (USPTO). He advises the Director and other USPTO executives on a wide variety of patent matters.

While at the USPTO, Mr. Pappas has led or contributed to numerous projects, such as the USPTO Pro Se Pilot Program, which he was instrumental in creating and implementing in response to a White House Executive Action directing the USPTO to provide dedicated educational and practical resources to inventors who lack legal representation. He has received three distinct Department of Commerce Bronze Medal Awards and was honored in a joint legislative resolution, passed by the New Jersey Senate and General Assembly, for his professional achievements and volunteer work.

Mr. Pappas was appointed by the Alexandria City Council to serve on the City of Alexandria Housing Affordability Advisory Committee, where he currently advises the city council on issues regarding the maintenance and promotion of affordable housing, makes recommendations for policies governing the expenditures of the city's Housing Trust Fund monies, and oversees the administration of the trust fund. He also serves as Chairman of the Board of Directors of the Supervisory Patent Examiner and Classifiers Organization (SPECO), which is a nonprofit organization comprised of approximately 400 USPTO managers and professionals established over 50 years ago for promoting the progress of its members and the patent examination system. He also serves as an Excellence in Government Senior Fellow with the Partnership for Public Service.

Mr. Pappas received a Bachelor of Science in computer engineering from the Georgia Institute of Technology.