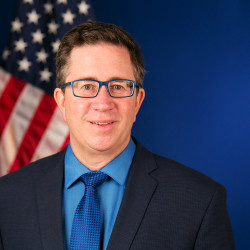 Patrick Ross is the Chief Communications Officer of the United States Patent and Trademark Office (USPTO). He is responsible for the development and implementation of strategic communications for the USPTO in coordination with the U.S. Department of Commerce and the Obama Administration, directly supporting and advising the Under Secretary of Commerce for Intellectual Property. He supervises a team of media relations, speechwriting, social media, and business engagement professionals focused on promoting the agency's goals and objectives. He also oversees the USPTO's partnership with the National Inventors Hall of Fame and management of the National Medal of Technology and Innovation, which is issued annually by the White House.

Mr. Ross was appointed Deputy Chief Communications Officer of the USPTO in April 2012. In that position he coordinated the development and implementation of strategic communications plans for the agency. Prior to joining the USPTO, Mr. Ross focused on intellectual property as the first executive director of the Copyright Alliance and as a vice president and senior fellow for The Progress and Freedom Foundation think tank. He was an award-winning D.C. reporter covering digital policy for several print and online publications, including Managing IP, CNET News.com and Communications Daily, and is a published author and award-winning creative writer. Mr. Ross began his career in Washington, D.C. on the personal staff of Sen. Harry M. Reid (D-NV).  He holds a Bachelor of Arts degree in international relations from Pomona College and Master of Fine Arts degree in Writing from the Vermont College of Fine Arts.