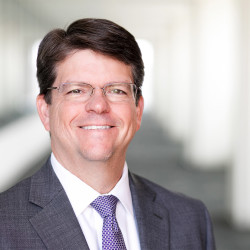 This is an archived page. Nathan Kelley was the Deputy General Counsel for Intellectual Property Law and Solicitor of the United States Patent and Trademark Office until July 2018. See our Executive biographies page for a current list of USPTO leadership.

Nathan Kelley became the Deputy General Counsel for Intellectual Property Law and Solicitor in November 2013 and was reappointed to that position in May 2016 after serving as the Acting Chief Judge of the Patent Trial and Appeal Board from July 2015 to May 2016.  As Solicitor, he defends the Under Secretary of Commerce and Director of the USPTO and the agency in court proceedings relating to intellectual property issues.

As Deputy Solicitor and an Associate Solicitor, Mr. Kelley spent seven years defending the USPTO's decisions in federal court, briefing and arguing numerous cases before the U.S. Court of Appeals for the Federal Circuit. He has defended the USPTO on a wide range of legal issues, from specific patentability determinations to broader issues involving the USPTO's statutory examination duties. He has also provided advice and guidance to the agency regarding various intellectual property issues, including the development and scope of rulemakings undertaken to implement the America Invents Act.