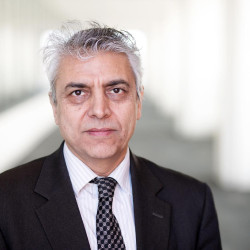 This is an archived page. Michael Razavi was the Senior Advisor and Director of Staff Operations until February 2019.

Michael Razavi has served the USPTO since 1985, where he has been on the leading edge of innovation, working creatively to develop and manage programs to improve the functioning of the Office and its reputation as a leading catalyst for economic and intellectual growth in industry, academia, and the public arena. Since 1992, Mr. Razavi has been a spokesperson for the office, presenting technical and nontechnical information and initiatives on subjects related to USPTO, intellectual property, and other government initiatives to a wide variety of audiences from small groups to national conferences.

Currently he serves as a Senior Advisor to the Office of the Undersecretary of Commerce and Director of the U.S. Patent and Trademark Office.  Before this appointment he was the Intellectual Property Outreach Educator and Senior Advisor to the Office of Innovation Development and Office of Education and Outreach, working to implement programs under the direction of the America Invents Act. In this role, he developed and oversaw the Pro Se Assistance Program for the USPTO, which became an executive action.

Mr. Razavi also led numerous projects and initiatives with foreign patent offices and embassies, as well as U.S. businesses, universities, and federal government agencies, including the Office of Personnel Management, Census Bureau, the Environmental Protection Agency, the Department of the Treasury, and the Department of Commerce. Mr. Razavi also served as the President of the Supervisory Patent Examiner-Classifiers Organization, representing 600-plus managers at the USPTO.

Mr. Razavi has worked with the Offices of the Under Secretary, the Commissioner of Patents, and the Office of Policy and International Affairs. Internationally, he worked with the directorate of the European Patent Office to compare IP issues in the two regions; represented the USPTO on an initiative to improve patent policy in Saudi Arabia and other GCC countries; and reviewed patent policies and laws that affect South and Central American countries for the Office of Policy and External Affairs.

Mr. Razavi holds degrees in Electrical and Medical Engineering from University of Maryland and George Washington University, a degree in Advanced Public Management from Syracuse University, and has been the recipient of the U.S. Vice President Al Gore Hammer Award and Department of Commerce Gold, Bronze, and Career Awards.