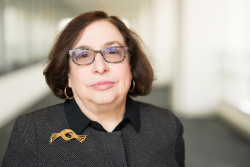 Meryl Hershkowitz is the Acting Commissioner for Trademarks at the United States Patent and Trademark Office (USPTO). She is responsible for oversight of all aspects of the Trademarks organization, including policy, operations and budget relating to trademark examination, registration, and maintenance. She previously served as Deputy Commissioner for Trademark Operations, where she oversaw processing of trademark applications and registrations, from pre-examination through renewal, including the law offices responsible for the examination of trademark applications.

Ms. Hershkowitz received her Juris Doctor from New York University School of Law and her Bachelor of Arts from the State University of New York at Stony Brook. She is a member of the Virginia State Bar and practiced law privately in Connecticut before joining the USPTO.